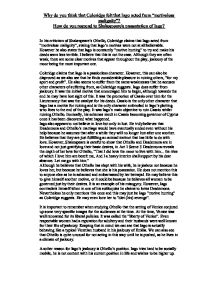 In his criticism of Shakespeare's Othello, Coleridge claims that Iago acted from "motiveless malignity", stating that Iago's motives were not at all believable. However he also states that Iago is constantly "motive hunting" to try and make his deeds seem less terrible. I believe that this is not the case. Although they are often weak, there are some clear motives that appear throughout the play, jealousy of the moor being the most important one. Coleridge claims that Iago is a passionless character. However, this can also be disproved as we also see that he finds considerable pleasure in ruining others, "for my sport and profit". He also seems to suffer from the same weaknesses that he accuses other characters of suffering from, as Coleridge suggests. Iago does suffer from jealousy. It was the initial motive that encouraged him to begin, although towards the end he may have lost sight of this. It was the promotion of Cassio over him for the Lieutenancy that was the catalyst for his deeds. Cassio is the only other character that Iago has a motive for ruining and is the only character embroiled in Iago's plotting who lives to the end of the play. ...read more.

His soliloquies often come after he has performed one of his deeds. His motives come after the actions as if he is forever trying to justify them. Coleridge also believed that Iago might have done this as a challenge for himself, "all will in intellect". Iago is a very intelligent man, however he does underestimate his wife and her intellect when she works out what has happened- but too late. Fortunately it is enough to expose him for what he really is. Often it is a case of luck rather than intelligence that helps Iago to succeed. The discovery of the handkerchief by chance is an example of just how fortunate Iago is. Without this, Iago's plans may not have worked as he would have difficulty proving Desdemona's disloyalty. Iago's timing is also impeccable which helped him use various situations to his advantage. For example, he manipulates the conversation with Cassio in Act 4 Scene 1 so that it appears to Othello, who is watching, that they are talking about Desdemona when they are in fact talking about Bianca. This is extremely clever and shows how skilful he is at manipulating people. ...read more.

Even though Iago uses innocent characters for his own benefit, I feel that this does not prove that Iago suffers from "motiveless malignity" but proves that he will do anything to get at Othello, even if it means hurting others. Another reason for this may be because he loves Desdemona, which he mentions in one of his soliloquies, and feels that as she does not love him in return then she should be punished. However, as Iago also seems to hate women and not believe in love, this doe not seem very likely. It is clear that Iago is malignant by his attempts to ruin completely innocent characters. He also shows malignancy when he goads Othello into strangling Desdemona rather than killing her in a less violent way. He does this because he wishes to make Othello not be able to live with himself after he has done it. He may also wish Desdemona to be terrified before she died which would not be the case if Othello had poisoned her as he was originally going to do. However, it seems to me that Iago was not motiveless. He had his reasons even though they were not in proportion to his actions. Iago's motives seem to have been a creation of his own mind. His jealousy is based on suspicion and ignorance rather than fact. ...read more.