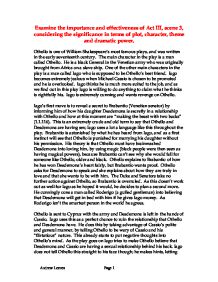 Othello - Examine the importance and effectiveness of Act III, scene 3, considering the significance in terms of plot, character, theme and dramatic power.

Examine the importance and effectiveness of Act III, scene 3, considering the significance in terms of plot, character, theme and dramatic power. Othello is one of William Shakespeare's most famous plays, and was written in the early seventeenth century. The main character in the play is a man called Othello. He is a black General in the Venetian army who was originally brought from Africa on a slave ship. One of the other main characters in the play is a man called Iago who is supposed to be Othello's best friend. Iago becomes extremely jealous when Michael Cassio is chosen to be promoted and he is overlooked. Iago thinks he is much more suited to the job, and as we find out in this play Iago is willing to do anything to claim what he thinks is rightfully his. Iago is extremely cunning and wants revenge on Othello. Iago's first move is to reveal a secret to Brabantio (Venetian senator) by informing him of how his daughter Desdemona is secretly in a relationship with Othello and how at this moment are "making the beast with two backs" (1.1.116). This is an extremely crude and old term to say that Othello and Desdemona are having s*x; Iago uses a lot a language like this throughout the play. Brabantio is astonished by what he has heard from Iago, and as a first instinct will see that Othello is punished for marrying his daughter without his permission. His theory is that Othello must have brainwashed Desdemona into loving him, by using magic (black people were then seen as having magical powers), because Brabantio can't see why she would fall for someone like Othello, older and black. Othello explains to Brabantio of how he has won Desdemona's heart fairly, but Brabantio wants proof. Othello asks for Desdemona to speak and she explains about how they are truly in love and that she wants to be with him. ...read more.

Cassio replies to Iago's questions in a polite way, which shows he treats women very well. This could be dangerous for Cassio though, as it could be used against him to show affection to Desdemona even though he only means it in a friendly way and not a s****l way. It is merely politeness, but this could cause him to be sacked from his job if Iago gets his own way. Later on in Act II, scene 3 there is a brawl between Cassio and Montano, which is caused by Iago in a plan to get him sacked from his role as lieutenant. He uses Roderigo to start the brawl which ends up with Cassio looking the guilty party. The fact that Cassio has been drinking doesn't help matters. During the brawl Iago sends Roderigo to get Othello. When Othello enters he is very abrupt and angry and shows how disgusted he is with the two servicemen. From now on during the play he uses one character to seek revenge on another e.g. before Othello arrives on the scene, he tries to split the fight between Cassio and Montano up. When Othello asks Iago about what he saw Iago denies seeing the brawl at all. The only person in the scene who knows Iago's true colours is Roderigo and the audience. This is a classic case of "dramatic irony", as we know more then the characters involved do. The audience would be in a state of sympathy at this point in the play for Cassio, whilst their hate for Iago grows inside them. This is because not only is Cassio sacked from his job as Lieutenant, but he also loses his reputation of being a polite and well mannered serviceman. Act III, scene 3 is the turning point in the whole play. Within the first few lines, Emilia ironically says that Iago is upset about Cassio being fired by saying: "I warrant it grieves my husband As his the case were his." ...read more.

This is what sets Othello off into a jealous rage. That gift to Desdemona had huge sentimental value as it is the first gift Othello gave her. The fact that she has supposedly given it to another man turns Othello's world upside down. Shakespeare is very clever in the way that he writes this play as he uses many dramatic techniques to make the play more interesting. He uses dramatic irony a lot; this is when the audience knows more then the people on the stage. For example, the audience knows that Iago really detests Othello and is just being kind to him so that he can ultimately seek revenge over the Moor. However apart from Roderigo, none of the other characters knew about this. This is a classic case of dramatic irony. Another technique that Shakespeare uses in his characters is the theme of appearance versus reality. This is when certain character appear to be acting in a way, but in reality are completely different when showing their true personalities to other characters, or in this case the audience. Iago is an extremely good example of this and shows the audience all throughout the play that he can act completely different in front of different characters in order to get what he wants out of them. This eventually helps Iago achieve his ultimate goal of revenge on Othello. In this battle between order and chaos, chaos seems to win. Othello abandons his reasons in judging Iago's "proofs," and his abandonment of language also marks the decent into chaos. Although it is the chaos controlled by Iago, still order and reason are the losing side in this play; raging emotions and speculations begin to rule Othello's fate, as he comes closer and closer to his tragic end. Overall I think this scene is very important to the play, even though it was hard to understand at points. The play could certainly not exist without it. It is an extremely varied scene with high points and low points and is the basis for the entire play. Andrew Leeves Page 1 ...read more.