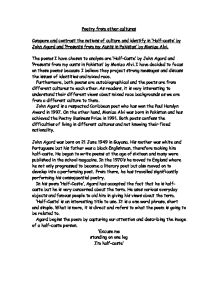 Poetry from other cultures

Poetry from other cultures Compare and contrast the notions of culture and identify in 'Half-caste' by John Agard and 'Presents from my Aunts in Pakistan' by Moniza Alvi. The poems I have chosen to analyse are 'Half-Caste' by John Agard and 'Presents from my aunts in Pakistan' by Moniza Alvi. I have decided to focus on these poems because I believe they project strong messages and discuss the issues of identities and mixed race. Furthermore, both poems are autobiographical and the poets are from different cultures to each other. As readers, it is very interesting to understand their different views about mixed race backgrounds as we are from a different culture to them. John Agard is a respected Caribbean poet who has won the Paul Hamlyn Award in 1997. On the other hand, Moniza Alvi was born in Pakistan and has achieved the Poetry Business Prize in 1991. Both poets confess the difficulties of living in different cultures and not knowing their fixed nationality. John Agard was born on 21 June 1949 in Guyana. His mother was white and Portuguese but his father was a black Englishman, therefore making him half-caste. He began to write poems at the age of sixteen and many were published in the school magazine. ...read more.

He is saying that if Picasso combines dissimilar colours together, does that mean he has produced a half-caste canvas? Obviously, the answer is no and therefore in Agard's opinion this shows how ludicrous the term 'half-caste' is. Following the previous example, Agard illustrates the weather in England as an image of the idiom of 'half-caste'. '...when light an shadow mix in de sky is a half-caste weather' In this example 'england weather' is mostly 'half-caste weather' as ir is usually quite clear and bright but cloudy at the same time, which is almost like two different types of weather merged together. This is ironic example for the readers to establish his connotation of 'half-caste'. Subsequently, Agard demonstrates how the weather in England is 'half-caste'. '...some o dem cloud half-caste till dem overcast so spiteful dem don't want de sun pass' This quote uses personification as it is saying that the clouds are malicious and won't let the sun pass. Effectively, this suggests that people who use the phrase 'half-caste' don't know how it feels and it can frequently cause offense. Moving on, Tchaikovsky is another famous person who is used to depict Agard's conception of 'half-caste'. ...read more.

'an I will tell yu de other half of my story' This has occurred as he feels he can't express his point across at one time and so needs to break it into two smaller sections for those people to understand him. Unmistakably, this is indeed very poignant and sad. To conclude, Agard has written a well-mannered, expressive poem of his views of the term 'half-caste' although it is very outspoken and quite satirical. The poem is written in four stanzas of varying length. The breaks between the stanzas force us to think and reflect on what we've just read. There is no regular rhyme scheme although quite a few lines rhyme in the poem. The first stanza is written in standard English but the others are written in a Caribbean dialect. This is because it makes the reader feel they are talking like the poet. There is no punctuation and most of the poem is written in lower case. This is to show that he is breaking the rules of what people feel is important as he feels he is breaking the rules by existing. An example of this is the capital 't' for Tchaikovsky, the famous Russian composer. This poem is very effective and after reading it, it has made me think about using the term 'half-caste' more carfully. ...read more.

***
This essay shows some detailed language of analysis and uses terminology appropriately and accurately. There needs to be more discussion and analysis of the fact the poem is written in dialect.
Discussion of rhyme, structure and dialect need to be at the beginning of the essay.
At times the student seems to be confused or does not clearly explain how satirical the poet is being futher compounded by the fact that the student uses the phrase 'half caste' to describe a person of dual heritage.