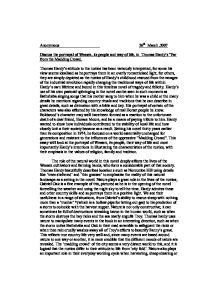 Portrayal of Wessex far from the madding crowd

Anonymous 26th March ,2007 Discuss the portrayal of Wessex, its people and way of life, in Thomas Hardy's "Far from the Madding Crowd. Thomas Hardy's attitude to the rustics has been variously interpreted, for some his view seems idealised as he portrays them in an overly romanticised light, for others, they are simply depicted as the rustics of Hardy's childhood rescued from the ravages of the industrial revolution rapidly changing the traditional ways of life within Hardy's own lifetime and bound in this timeless novel of tragedy and felicity. Hardy's use of his own pastoral upbringing in the novel can be seen in such moments as Bathsheba singing songs that his mother sang to him when he was a child or the many details he mentions regarding country rituals and traditions that he can describe in great details, such as divination with a bible and key. His portrayal of certain of the characters was also affected by his knowledge of real Dorset people he knew. Boldwood's character may well have been formed as a reaction to the unfortunate death of a dear friend, Horace Moure, and be a means of paying tribute to him. Hardy wanted to show how individuals contributed to the stability of local life and how closely knit a their society became as a result. ...read more.

The rustics at first impression seem to be portrayed as a chorus, capable of commenting ion their mistress in a comic witty manner, but when called into action themselves seem a decidedly disorganised bunch of workers needing the leadership of a Gabriel Oak to help organise them to help extinguish a fire. Yet Thomas Hardy shows the Weatherbury folk as team with members who compliment each other's strengths and weaknesses. Gabriel Oak and Bathsheba Everdene both show additional ambition and determination of will setting them slightly apart from and probably above, the normal standard for the locality. The social expectations of women are even more prescribed than for men at this time. Bathsheba seems something of a role model in some aspects due to her ambitious personality, and the determination she shows to run her own farm without a bailiff in defiance of current prejudices. In conventional 1840s' thinking women had a lesser role in society; they were expected to be dependent on a man-whether it was their father or husband , and rarely dominated 'men's' work. f***y Robin's fate in the workhouse reveals how desperately cruel society at large could be to a woman who falls out of society's rather strict code of respectable female behaviour. The bitter reality of the workhouse for the destitute demonstrates the way the workers are dependent on their employer not only for finance, but also for a means of life and a place to stay. ...read more.

The portrayal of Wessex is the portrayal of its people, since their country way of life and approach to different situations makes their home village reflect their style of life. The malthouse itself is much like a shrine where the working class can meet and exchange talk of their daily toils and troubles working on the farm under Bathsheba Everdeene. It is interesting to see how the servants enjoy to gossip about their masters, in this case they seem to be united by the many rumours surrounding Bathsheba and her psychedelic relationships with a range of different men, from the humble Oak to the gallant Troy and the slightly obsessed Boldwood.Like in many cultures and societies ,gossip is a way of exchanging different opinions and points of views about trivial or solemn matters, and becomes for the reader an engrossing insight into the essential character of Wessex attitudes. To conclude this interpretation is not an idealised one nor is it too critical of their way of life. Hardy simply re wrote his childhood memories as the Weatherbury farm of Bathsheba. His book is not overly analytical, so it does not give the reader a full explanation of the reasoning behind their actions. Whether guided by tradition or their individuality, the lives of these Wessex folk are a constant source of pleasure and amusement for the modern readers. ...read more.