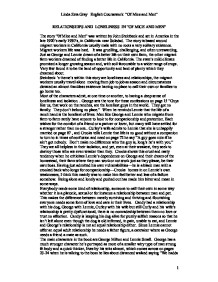 RELATIONSHIPS AND LONELINESS IN "OF MICE AND MEN" The story "0f Mice and Men" was written by John Steinbeck and set in America in the late 1920's early 1930's, in California near Soledad. The story is based around migrant workers in California usually male with no roots a very solitary existence. Migrant workers life was hard. It was gruelling, challenging, and often unrewarding. Just as George and Lennie dream of a better life on their own farm, the other migrant farm workers dreamed of finding a better life in California. The state's mild climate promised a longer growing season and, with soil favourable to a wider range of crops. Very few found it to be the land of opportunity and land of plenty which they dreamed about. Steinbeck 's theme's within this story are loneliness and relationships, the migrant workers usually travel alone moving from job to job as season and circumstances dictated an almost thankless existence having no place to call their own or families to go home too. Most of the characters admit, at one time or another, to having a deep sense of loneliness and isolation. . George sets the tone for these confessions on page 15 "Guys like us, that work on the ranches, are the loneliest guys in the world. They got no family. They don't belong no place." When he reminds Lennie that the life of a ranch hand is the loneliest of lives. Men like George and Lennie who migrate from farm to farm rarely have anyone to look to for companionship and protection. Each wishes for the comfort of a friend or a partner or lover, but many will have settled for a stranger rather than no one.. Curley's wife admits to Lennie that she is unhappily married on page 87 , and Crooks tells Lennie that life is no good without a companion to turn to in times of confusion and need on page 72 he say "A guy goes nuts if he ain't got nobody. ...read more.

On page 59 he says "I ain't much good with on'y one hand. I lost my hand right here on this ranch. That's why they give me a job swampin'. An' they give me two hundred an' fifty dollars cause' I los' my hand." Then he proceeds to ask if he could come in with them by trying to bribe them with his lifesavings. Candy is too weak to put his dog down and out of his misery, to offer his faithful companion even this last final kindness, so Carlson has to do it, Carlson comes across almost heartless and devoid of feeling when he does this, Candy seems to shrink in on himself feeling very sad lying in his bunk turning his face away from prying eyes. On the other hand Carlson may seem cruel and heartless but I think in his own strange way he was doing a kindness based on selfishness in a way, he couldn't stand the sight or smell of the old dog, but a kindness non the less, since no one else was willing to put the old dog out of his misery. It was the right action but for all the wrong reasons. The boss's son, Curley wears high-heeled boots to distinguish himself from the field hands. Rumoured to be a champion prize-fighter (p54), he is a confrontational, nasty minded and aggressive man who compensates for his smallness of body and mind by picking fights with larger men. Recently married, Curley is plagued with jealousy perhaps because he himself is incapable of faithfulness and doesn't really love or know his wife, she is more of a trophy to him, and he is extremely possessive of his flirtatious young wife. Curley's wife is never given a name and is only referred to in reference to her husband. The men on the farm refer to her as a "tramp," a "tart," and a "looloo.(P51)" ...read more.

Of Mice and Men is about the struggle of the weak in society and loneliness in or out of a relationship. Loneliness is an inevitable fact of life that not even the strongest can avoid, Crooks, Candy and Curley's wife all suffer through loneliness and isolation and lack of a viable relationship. George and Lennie are unique in that they have each other. Their companionship contrasts the loneliness that surrounds them, the loneliness of the outcast black man, the loneliness of the "scarlet" woman, the loneliness of the old, helpless crippled swamper. People need relationships even though it is difficult keeping a good relationship going since no two people are the same or have the exact same thoughts and beliefs. To keep a relationship flourishing you must have things in common, you must be able to disagree or agree without fear of the relationship ending, you must be caring of one another and respect each other, and some people do not have the social skills to keep a relationship fruitful. Quite often a person suffering through isolation will forever be trying to fulfil a friendship like Candy trying to become part of the dream with Lennie and George; he was trying to buy into a relationship. I do not think Steinbeck had a high regard for woman either, I think that was a sign of the times though and the era they lived in, woman had a place and that was to serve man. Curley's wife was in a relationship yet was the loneliest of all, she was married yet still was alone, still felt unloved and unwanted, and that's why she flirted to ease her hurting. I think Steinbeck had a very bleak view of relationships and woman in general, all the relationships seemed dysfunctional. People were made to live in society and it a natural instinct to seek friendship and companionship. When they find it, they are content within themselves. Friendship and interaction are two very necessary things; we all need them to combat loneliness. ?? ?? ?? ?? Linda Zeta Gray English Coursework "Of Mice and Men" 1 ...read more.

There is a lot of valuable insight here into the characters in the story. Solid points are made, often backed by strong textual references and quotations. The lexical resource is very broad, both in the appropriateness of terms used and in effective phrasing. However, organisation is poor and sentences are frequently extremely long, rambling and poorly punctuated.

Suitable concluding material appears several paragraphs before the end, then the essay writer launches into more examples and analysis. There is no doubt, though, that this writer shows great promise, if only she can learn to organise better and learn the basics of sentence construction and punctuation.