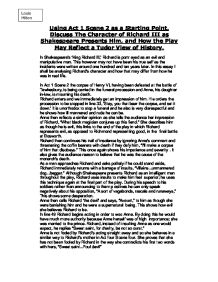 Richard III's Character in the Play and History

Using Act 1 Scene 2 as a Starting Point, Discuss The Character of Richard III as Shakespeare Presents Him, and How the Play May Reflect a Tudor View of History. In Shakespeare's 'King Richard III,' Richard is portrayed as an evil and manipulative man. This however may not have been his true self as the incidents were written around one hundred and ten years later. In this essay I shall be analysing Richard's character and how that may differ from how he was in real life. In Act 1 Scene 2 the corpse of Henry VI, having been defeated at the battle of Tewkesbury, is being carried in the funeral procession and Anne, his daughter in-law, is mourning his death. Richard enters and we immediately get an impression of him. He orders the procession to be stopped in line 33, 'Stay, you that bear the corpse, and set it down.' It is unorthodox to stop a funeral and he also is very disrespectful and he shows how ill mannered and rude he can be. Anne then reflects a similar opinion as she tells the audience her impression of Richard, "What black magician conjures up this fiend." She describes him as though he is evil, this links to the end of the play in which Richard represents evil, as opposed to Richmond representing good, in the final battle at Bosworth. ...read more.

Richard pretends to make peace with his enemies in order to make them trust him so that he will be able to get away without accusation, "To any in this presence, I desire to reconcile me to his friendly peace." Richard acts modestly and pretends to be unwilling as he is offered to take the throne, this fools everyone and they believe that he is a pious man and his modesty shows how good a man he is. "I am unfit for state and majesty. I do beseech you, take it not amiss; I cannot nor I will not yield to you." This also shows how he takes risks through the play as the Lord Mayor and citizens may have just accepted his refusal and turned away. Richard often manipulates others right through the play. He mostly succeeds in achieving his goals and mocks people for the weakness after getting what he wants. Richard blames Clarence's imprisonment on queen, " 'Tis not the king that sends you to the Tower. My lady Grey, his wife, Clarence, 'tis she that tempts him to this harsh extremity" Richard offers the bribe of the earldom of Hereford to Buckingham; this bribe helps Richard successfully manipulate him. Buckingham helps Richard quite a lot during the play but later Richard does not honour his promise. ...read more.

There is evidence that Richard was not directly responsible for Clarence's execution and that Clarence was deserving of imprisonment as he was disloyal to his brother King Edward IV. It is now known that Richard had not killed King Henry VI. Anne died naturally after a happy marriage to Richard. This shows that he is not as cynical as Shakespeare portrays him throughout the play. Richard did not make himself Lord Protector, he was appointed by Edward IV. Richard was loyal and trusted by his brother, that's why he was given land in the north. Richard is now thought to have been faithful to his brother and was not the backstabber as shown in the play. Parliament approved Richard's claim to be King, he may have actually had the right to the throne. Richard may have genuinely believed that the princes were illegitimate, rather than spreading rumours to get to the throne, and he was justified in keeping them from the throne. Richard regarded himself as king and rather than the usurper that Shakespeare portrays. There is no evidence that Richard is linked to the deaths of the two Princes in the Tower of London. Richard was possibly not the murderer he was believed to be in the Tudor years, nor that he murdered anyone, other than in battle. Richmond's claim to the throne was weaker than Richard's. After Richmond became King he tried to blacken Richard and that eventually became history for Shakespeare, he may have thought that his play was historically correct. ...read more.