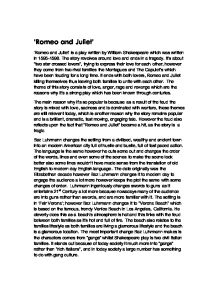 'Romeo and Juliet' 'Romeo and Juliet' is a play written by William Shakespeare which was written in 1595-1596. The story revolves around love and ends in a tragedy. It's about "two star crossed lovers", trying to express their love for each other, however they come from two rival families the Montagues and The Capulet's which have been feuding for a long time. It ends with both lovers, Romeo and Juliet killing themselves thus leaving both families to unite with each other. The theme of this story consists of love, anger, rage and revenge which are the reasons why it's a strong play which has been known through centuries. The main reason why it's so popular is because as a result of the feud the story is mixed with love, sadness and is dominated with warfare, these themes are still relevant today, which is another reason why the story remains popular and is a brilliant, dramatic, fast moving, engaging tale. However the feud also reflects upon the fact that "Romeo and Juliet" became a hit, as the story is a tragic Baz Luhrmann changes the setting from a civilised, wealthy and ancient town into an modern American city full of hustle and bustle, full of fast paced action. The language is the same however he cuts some out and changes the order of the words, lines and even some of the scenes to make the scene look better also some lines wouldn't have made sense from the translation of old English to modern day English language. ...read more.

Benvolio is a member from the Montagues whilst Tybalt is a member from the Capulets. The contrast between Benvolio and Tybalt is that Benvolio is a peacemaker, whilst Tybalt is a hostile violent man, when Benvolio try to calm down the fight, "I do but keep the peace" Tybalt retaliates with a "What drawn and talk of peace. I hate the word as I hate h**l, all Montague's and thee..." this shows the feud as even though there may signs of love from the feud hate will always conquer it, as Tybalt doesn't accept Benvolio peace. The Prince in Baz Lurhmann's 'Romeo and Juliet' is the chief of police; this change is good as it shows the Prince has the most power in the story. The Prince tries and stops the feud, when the Prince warns both families "If ever you disturb our streets again your lives shall pay the forfeit of the peace." Baz Luhrmann shows the feud as not only the families are involved in this, however the community, the feud is big and serious as "your lives shall pay the forfeit" is a big price to pay, and that everyone is getting infuriated from this feud maybe because it has been going on for too long and has cost lives for example Tybalt. Act 1 scene 5 is the masked ball. Baz Luhrmann changes the original by having a fancy dress party Romeo is dressed up in a knight costume whilst Juliet is dressed as a princess. ...read more.

Romeo turns into a fanatic because Tybalt killed his best friend Mercuito. Whilst he chases Tybalt, because of the feud we see a darker side into Romeo. When Romeo catches Tybalt he shoots him, and leaves Tybalt in a pool. Water is used again as a symbol of death, as Tybalt lays in a pool of water, while he was dead. We can see the feud is serious, as Romeo would have died as well "Romeo must not live" if Tybalt didn't kill Mercuito. Instead of a death penalty Romeo gets banished from Verona. "Romeo slew Tybalt, Romeo must not live" which is said by Mrs Montague Act 5 scene 3, is an important bit of the play for the feud the prince explains about the feud. "Where be these enemies? Capulet! Montague! See, what a scourage is laid upon your hate that heaven finds means to kill your joys with love all are punished.' Baz Luhrmann makes an echo in "All are punished" too show that the feud paid cost both families which were their children. The feud is now settled and The Montague's and The Capulet's are able to settle their lives as allies. Overall, I think the feud was shown really well in this film. The feud consisted of love, rage, revenge and power. The film was outstanding, and the way Baz Luhrmann modernized Romeo and Juliet was done very well. I enjoyed the movie. ...read more.