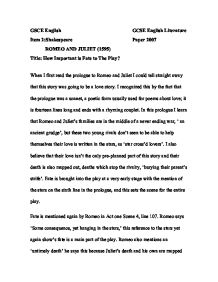 GSCE English GCSE English Literature Item 2:Shakespeare Paper 2007 ROMEO AND JULIET (1595) Title: How Important is Fate to The Play? When I first read the prologue to Romeo and Juliet I could tell straight away that this story was going to be a love story. I recognized this by the fact that the prologue was a sonnet, a poetic form usually used for poems about love; it is fourteen lines long and ends with a rhyming couplet. In this prologue I learn that Romeo and Juliet's families are in the middle of a never ending war, ' an ancient grudge', but these two young rivals don't seen to be able to help themselves their love is written in the stars, as 'star cross'd lovers'. ...read more.

Romeo also mentions an 'untimely death' he says this because Juliet's death and his own are mapped out. Most of the references to fate in the play are made by Romeo and are mostly mentioning death and love. In Act 2 Scene 2, line 7, death is mentioned again by Romeo, 'love-devoured death'. Romeo describes his death as 'love-devoured' because he is so in love with Juliet that when he finds her 'dead' his love takes over and he dies, for his love. Act 3 scene 5, line 54 also brings another mention of fate by the love struck Romeo 'For sweet discourses in our time to come,' here I think that the main word in this sentence is 'time', because this brings fate into the picture once again; 'time' emphasises the fact that their life's have been planned and that they only have a limited life span. ...read more.

In act 5 scene 3, on line 153, Friar Lawrence mentions fate by saying that it is 'a greater power than we can contradict' this is his way of saying Juliet should except that Romeo has taken his life, and that she should leave him, but Juliet does not except this. When the Friar leaves, Juliet takes her endeared husband, Romeo's dagger and drives it through her already shattered heart, saying her last words of 'This is thy sheath; there rest, and let me die.' In conclusion, fate is the true meaning of the play, and it plans everything in all of the characters life's, mostly Romeo and Juliet's. Fate has a very despondent ending planned for the life's of the lovers. 'Never was a story of more woe than this of Juliet and her Romeo.' ...read more.