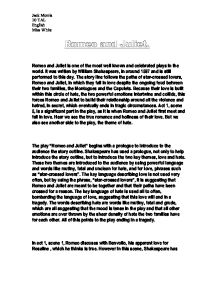 Romeo and Juliet. Romeo and Juliet is one of the most well known and celebrated plays in the world. It was written by William Shakespeare, in around 1597 and is still performed to this day. The story line follows the paths of star-crossed lovers, Romeo and Juliet, in which they fall in love despite the ongoing feud between their two families, the Montogues and the Capulets. Because their love is built within this circle of hate, the two powerful emotions intertwine and collide, this forces Romeo and Juliet to build their relationship around all the violence and hatred, in secret, which eventually ends in tragic circumstances. Act 1, scene 5, is a significant part in the play, as it is when Romeo and Juliet first meet and fall in love. Hear we see the true romance and holiness of their love. But we also see another side to the play, the theme of hate. The play "Romeo and Juliet" begins with a prologue to introduce to the audience the story outline. Shakespeare has used a prologue, not only to help introduce the story outline, but to introduce the two key themes, love and hate. ...read more.

Another example that shows us how Romeo feels for Juliet, is when he says, "So shows an snowy dove trooping with crows". This makes the audience understand that Romeo thinks of Juliet being totally unique and special compared to everyone else that surrounds her, including Rosaline. In act 1, scene 5, the audience sees the moment in the play when Romeo and Juliet first meet. In this particular scene Shakespeare decides to use a sonnet to show the feelings they have for each other. A sonnet is a love poem that is considered to be incredibly hard to write, and because of this it is often referred to as a perfect form for expressing love. This use of sonnet is suggesting that Shakespeare intended the audience to see Romeo and Juliet's love as perfect, pure and true, and that it was meant to be. The way Shakespeare has chosen to structure the sonnet is also significant, as he makes both Romeo and Juliet perform the sonnet together, signifying that both lovers are on the same level and that they are both feeling the same way about each other. ...read more.

This is proven when the audience sees Romeo's heartache at the fact that Rosaline does not feel the same way that Romeo feels about her. Secondly I believe that Shakespeare is trying to tell the audience that true love can happen to anyone, under any circumstances. This is shown when Romeo and Juliet fall in love, this is because even through the hatred and violence between their two families, they both felt strongly enough to try and carry on their relationship together. It is also suggesting that love is destined and is something that comes natural to the two people involved. I believe that these two ideas of love are represented very much in act 1, scene 5, when the audience sees the sonnet performed by the two star-crossed lovers, and when we see Romeo pouring his heart out to Benvolio, in act 1, scene 1. All in all I believe that Shakespeare has intended the audience to view true love, as something special and rare. I also think that he wanted the audience to believe that true love can sometimes be dangerous and tragic, and that something so special is not meant to last very long. Jack Morris 10 TAL English Miss White ...read more.