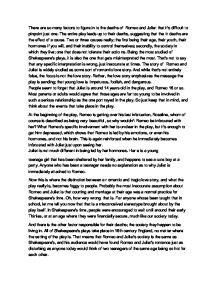 There are so many factors to figure in to the deaths of Romeo and Juliet that it's difficult to pinpoint just one. The entire play leads up to their deaths, suggesting that their deaths are the effect of a cause. Two or three causes really; the first being their age, their youth, their hormones if you will, and their inability to control themselves; secondly, the society in which they live; one that does not tolerate their actions. Being the most studied of Shakespeare's plays, it is also the one that gets misinterpreted the most. That's not to say that any specific interpretation is wrong, just inaccurate at times. The story of Romeo and Juliet is widely studied as some sort of romantic love story. And while that's not entirely false, the focus is not the love story. Rather, the love story emphasizes the message the play is sending; that young love is impetuous, foolish, and dangerous. People seem to forget that Juliet is around 14 years old in the play, and Romeo 16 or so. Most parents or adults would agree that those ages are far too young to be involved in such a serious relationship as the one portrayed in the play. So just keep that in mind, and think about the events that take place in the play. ...read more.

When the Friar is first introduced, he casually comments on the good uses that comes from nature and how they can be "strain'd from that fair use Revolts from true birth, stumbling on abuse" (II.3 lines 19-20). As a priest, one would hope that the Friar would not abuse nature yet he does so. As an escape route for Juliet, the Friar offers her (most unwisely) a poison for her to drink. The text goes on to explain that Juliet, though doubtful, takes the Friar's poison because he had been tried "a holy man" (IV.3 line 29). It must be said, however, that while Friar Laurence influenced the character's actions, he cannot be held solely responsible. Romeo and Juliet viewed him as perfect, and although he was a priest he could never live up to this description. Still, Friar Laurence's misuse of power paved the path for the teenager's decisions. Romeo and Juliet must take most of the blame for the tragedy. While it can be argued that their actions were simply the product of those around them lack of discipline, foolish encouragement and advice from adults - the text suggests another possible interpretation. It is true that these factors added to the tragedy, but it was ultimately Romeo and Juliet's actions that lead to their own deaths. ...read more.

Neither did Romeo wish to die, but life without Juliet was no life at all. If only those letters had reached Romeo! How ironic considering Balthasar was able to enter Mantau, despite the quarantine, and give his friend the wrong information. Also, had the apothecary acted by conscience instead of by greed, Romeo would not have had the means to so quickly kill himself ("Thy drugs are quick.") Finally, Romeo was unable to read his lover's face and discern life. He noted but did not understand when he said, "Death's pale flag has not advanced here." He saw her red lips, her rosy cheeks and still believed she was dead. But then again, why would he think otherwise? How many live people are lying around in tombs? Let's be reasonable. We know the end. Juliet awakened (surrounded by death in a tomb) just a few seconds too late to save Romeo. If she had lived, what would her future be? Not even Paris survived. The body count was staggering, just as in a tragedy. It is tragic, except when viewed through the lens of Fate. The lovers were preordained to love one another eternally, and eternally they do live and love forever in Shakespeare's pages and in the heavens. Their conception was the bitter medicine that cured embedded hatred that threatened Verona's citizens. Romeo and Juliet define passion and romance and love, and these are things that no one can prevent, not even the lovers themselves. . ?? ?? ?? ?? ...read more.