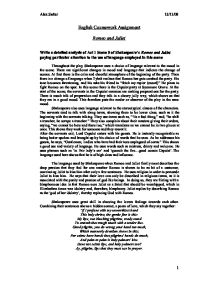 Throughout the play, Shakespeare uses a choice of language relevant to the mood in the scene. There are significant changes in mood and language that indicate the change of scenes. At first there is the calm and cheerful atmosphere of the beginning of the party. Then there is a change of language when Tybalt realises that Romeo has gate crashed the party. His tone becomes threatening, and his asks his friend to “fetch my rapier (sword)” He plans to fight Romeo on the spot. In this scene there is the Capulet party at Sycamore Grove. At the start of the scene, the servants in the Capulet mansion are making preparations for the party. There is much talk of preparation and they talk in a cheery jolly way, which shows us that they are in a good mood. This therefore puts the reader or observer of the play in the same mood.

Shakespeare also uses language relevant to the stereotypical classes of the characters. The servants tend to talk with slang terms, showing them to be lower class, such as it the beginning with the servants talking. They use terms such as, “’tis a foul thing,” and, “he shift a trencher, he scrape a trencher.” They also complain about their masters giving their orders, saying, “we cannot be here and there too,” which translates as we cannot be in two places at once. This shows they work for someone and they resent it.

After the servants exit, Lord Capulet enters with his guests. He is instantly recognisable as being better spoken and brought up by his choice of words that he uses. As he addresses his guests, he says, “Gentlemen, Ladies who have had their toes unplagued of corns.” This shows a good use and variety of language. He uses words such as mistress, dainty and welcome. He uses phrases such as ‘in Fair lady’s ear’ and ‘quench the fire…good cousin Capulet’. The language used here shows that he is of high class and influence.

The language used by Shakespeare when Romeo and Juliet finally meet describes the deep passion that they feel for one another. Romeo is shown to be an bit of a customer, convincing Juliet to kiss him after only a few sentences.  He uses religion in order to persuade Juliet to kiss him.  He says that their love can only be described in religious terms, as it is associated with the purity and passion of god-like beings.  In doing so, they are flirting with a blasphemous idea in that Romeo sees Juliet as a Saint that should be worshipped, which in Elizabethan times was idolatry and, therefore, blasphemy. Juliet replies by describing Romeo as the ‘god of her idolatry’, thereby replacing God with Romeo.

Shakespeare uses great skill in showing the lovers feelings towards each other. Combining their sentences shows a hidden sonnet, a poem of love, which they say together:

‘If I profane with my unworthiest hand
This holy shrine, the gentle fine is this:
My lips, two blushing pilgrims, ready stand
To smooth that rough touch with a tender kiss.

Good pilgrim, you do wrong your hand too much,
Which mannerly devotion shows in this;
For saints have hands that pilgrims' hands do touch,
And palm to palm is holy palmers' kiss.

Have not saints lips, and holy palmers too?

Ay, pilgrim, lips that they must use in prayer.

O, then, dear saint, let lips do what hands do;
They pray, grant thou, lest faith turn to despair.

Saints do not move, though grant for prayers' sake.

Then move not, while my prayer's effect I take.
Thus from my lips, by yours, my sin is purged.

Then have my lips the sin that they have took.

Sin from thy lips? O trespass sweetly urged!
Give me my sin again.

The scene between Romeo and Juliet provides a sign of the roles that each will play in the relationship. It is clear that Romeo is the more dominant partner, using great skill to seduce Juliet.  She is a young girl and during the first kiss remains motionless.  Although she is greatly attracted to Romeo, she allows him to make the first move, but during the second kiss, she is much more aggressive, using her logic to ensure that Romeo kisses her again in order to take back the sin that he has placed on her lips.  Juliet during this conversation starts to mature from a timid young girl to a mature woman.  She says, ‘You kiss by th’ book,’ which can be understand in two ways.  Firstly, it emphasizes Juliet’s naivety, and in many productions the line is said with a degree of wonder so that the audience thinks she is saying what a great kisser Romeo is. Secondly, the line can be said in a matter of fact manner indicating that Romeo kisses by the book, meaning that he is proficient, but unoriginal.  What did Shakespeare intend?  However, it is clear that Juliet is impressed with Romeo and ends up encouraging him to pursue their love.

However, Shakespeare ensures that the audience is not totally lost in the couple’s lovemaking, by inserting the knowledge that Tybalt has discovered Romeo’s identity. He says to his friend, “fetch me my rapier” as he wishes to fight Romeo there and then. Lord Capulet stops Tybalt, as he does not want any violence at his party, but Tybalt vows to take the matter further.