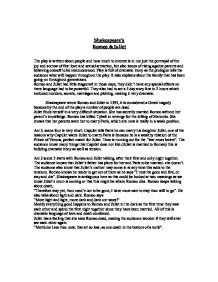 Shakespeare's Romeo & Juliet The play is written about people and how much to interest is in not just the portrayal of the joy and sorrow of first love and s****l attraction, but also issues of rising against parents and believing oneself to be misunderstood. Play is full of dramatic irony as the prologue tells the audience what will happen throughout the play. It also explains about the family that has been going on throughout generations. Romeo and Juliet had little stagecraft in those days, they didn't have any special effects so there language had to be powerful. They also had to act a 5 day story line in 2 hours which included murders, secrets, marriages and plotting, making it very dramatic. Shakespeare wrote Romeo and Juliet in 1593, it is considered a Greek tragedy because by the end of the play a number of people are dead. Juliet finds herself in a very difficult situation. She has secretly married Romeo without her parent's knowledge. Romeo has killed Tybalt in revenge for the killing of Mercutio. She knows that her parents want her to marry Paris, which she now is really in a weak position. Act 3, scene four is very short: Capulet tells Paris he can marry his daughter Juliet, one of the reasons why Capulet wants Juliet to marry Paris is because he is a wealthy relation of the Prince of Verona, perfect match for Juliet. ...read more.

"Out, you green sickness carrion! Out, you baggage! You tallow face! At this stage Capulet is in an angry mood but when he leaves the room he is claim again. In the play you will notice that Capulet starts of claim then goes angry 'Tempest tossed body', this is a metaphor of the way Capulet acts when he loses his tempter, then goes calm again. Capulet is very harsh when he speaks to Juliet, For example he says "I tell thee what: get to church a 'Thursday' or never after look me in the face". Capulet is showing control over Juliet he is saying that you are getting married on Thursday, and if you don't then I don't want to know you. Juliet's behaviour has changed dramatically since the start of the play, she has become more confident in answering back and disobeying her parents, especially back then it wasn't found upon to misbehave. Juliet is acting as if she just wants to be an adult. I think this is as she has just got married and feels she is older than what she actually is. Although outside Juliet is angry and upset with her parents inside she is feeling guilty and she has dropped herself in it and knows all her parents are doing is try to help. ...read more.