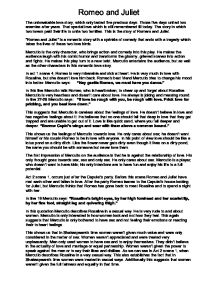 Romeo and Juliet. Mercutio is the only character, who brings action and comedy into this play. He makes the audience laugh with his comic humor and transforms the gloomy, grieved scenes into action and fights.

Romeo and Juliet The unbreakable love story, which only lasted five precious days. Those five days united two enemies after years. That special love which is still remembered till today. The story in which two lovers paid their life to unite two families. This is the story of Romero and Juliet. "Romeo and Juliet" is a romantic story with a sprinkle of comedy that ends with a tragedy which takes the lives of these two love birds. Mercutio is the only character, who brings action and comedy into this play. He makes the audience laugh with his comic humor and transforms the gloomy, grieved scenes into action and fights. He makes this play turn to a new twist. Mercutio entertains the audience, but as well as the other characters in this romantic love story. In act 1 scene 4, Romeo is very miserable and sick at heart. He is very much in love with Rosaline, but she doesn't love him back. Romeo's best friend Mercutio tries to change his mood into better. Mercutio says: "Nay gentle Romeo, we must have you dance." In this line Mercutio tells Romeo, who is heartbroken, to cheer up and forget about Rosaline. Mercutio is very heartless and doesn't care about love. He always is joking and messing round. In line 27-28 Mercutio says: "If love be rough with you, be rough with love. Prick love for pricking, and you beat love down." ...read more.

In this quotation, Mercutio is making bawdy jokes about sex and having sex. he is saying that Romeo has fun last night. In line 63 Mercutio says:"Follow me this jest now, till thou has warn out thy pump, that when the single sole of it is worn, the jest may remain after the wearing sole singular. Here, Mercutio is again making jokes about having sex, he is saying that you must have enjoyed having sex. In line 80 Mercutio says: "Thy wit is a very bitter sweeting, it is a most sharp sauce." Here Mercutio is taking out the mickey of Romeo. He is saying that you are very quick witted. "Now art thou sociable, now art thou Romeo; now art thou what thou art." Romeo is back and is saying the things that he used to say about love. Mercutio is very pleased and delighted to hear that Romeo is back to his normal self. Mercutio is insulting the nurse by saying: "To hide her face; for her fan's the fairer face." Mercutio is very much being rude to the nurse and is saying that her vagina us better looking than her face. He is abusing the nurse and being very impolite. Mercutio says: "The dial is now upon the prick of noon." He is making reference to a part of his body and again is being extremely rude. In Act 3 scene 1, this is the last time we see and hear from Mercutio in this play. ...read more.

Shakespeare has thought very much before creating him. He knew how the audience in that time would react to Mercutio's character. He knew that without him this play wouldn't be a tragedy. He is the only character who dies in this play. Without him there wouldn't be anyone who makes joke, the audience in Shakespeare's time wouldn't want to see this play otherwise. In Shakespeare's time the audience would have laughed at what Mercutio says in the play, they thought that his character is like a normal, ordinary human being. They thought that men should be like him, Mercutio would be the ideal man. However the modern audience wouldn't think that he is funny at all. They would think that Mercutio is extremely rude and impolite in this play. That is because the views and opinions on love and sex have clearly changed from the past to now. Now people respect women and don't criticizes them in any way. Especial they don't describe women in sexual ways, and also think that women should be given much more respect than they were given in the past. I personally would think that Mercutio is a humorous character, but only if I was living in Shakespeare's time. Now I think that he is very rude about women and all he wants is sex all his life. He thinks that sex is the only aim of a man that every man has to achieve. Without Mercutio this romantic love story of Romeo and Juliet wouldn't end in this way and wouldn't be called a tragedy. By Sonia Bhangu ...read more.