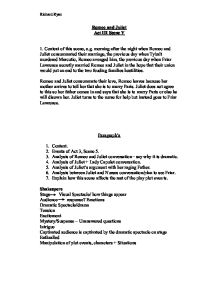 Romeo and Juliet Act III Scene V 1. Context of this scene, e.g. morning after the night when Romeo and Juliet consummated their marriage, the previous day when Tybalt murdered Mercutio, Romeo avenged him, the previous day when Friar Lawrence secretly married Romeo and Juliet in the hope that their union would put an end to the two feuding families hostilities. Romeo and Juliet consummate their love, Romeo leaves because her mother arrives to tell her that she is to marry Paris. Juliet does not agree to this so her father comes in and says that she is to marry Paris or else he will disown her. Juliet turns to the nurse for help but instead goes to Friar Lawrence. Paragraph's 1. Context. 2. Events of Act 3, Scene 5. 3. Analysis of Romeo and Juliet conversation- say why it is dramatic. 4. Analysis of Juliet + Lady Capulet conversation. 5. Analysis of Juliet's argument with her raging Father. 6. Analysis between Juliet and Nurses conversation/plan to see Friar. 7. Explain how this scene affects the rest of the play plot events. Shakespere Stage Visual Spectacle/ how things appear Audience response? ...read more.

This ends the conversation between them and this is when Juliet's father, Capulet, comes in. Shakespeare starts this scene after Juliet's mother has had words with her daughter, her father enters the room and Juliet is once again in tears because of Romeo's absence and that she is supposed to be married to Paris on Thursday. We can see that Juliet is upset about the arranged marriage by the conversation between Lady Capulet and Capulet which is demonstrated by 'Capulet - Have you delivered to her our decree, Lady Capulet - Ay, Sir but she will none, she gives you thanks' this shows how Juliet is very upset about the whole idea of getting married to Paris but once again her father is under the impression that she is upset because she has lost Tybalt which is highlighted by the phrase 'But for the sunset of my brothers sun it rains downright, How now a conduit girl? What still in tears?' She is thankful that her father has gone through all this trouble for arranging this marriage with Paris this is also highlighted by the phrase 'Not proud you have but thankful that you have, proud can I never be of what I hate, but thankful even for hate that is meant love.' ...read more.

This scene is quite a important one to the future plot events because if she didn't consummate her love with Romeo that night the marriage would not be as strong therefore when her mother and father asked her to marry Paris if the marriage was not yet consummated there would have been a greater chance of a marriage with Paris. Additionally when Lady Capulet tells her of this news the story is changed dramatically everything was going down hill from the moment that Romeo killed Tybalt. When Juliet is told to marry Paris she is faced with an ultimatum to run away with Romeo and be disowned by her father by not marring Paris or to marry a second time to Paris and keep her loving family but be in a loveless marriage with Paris. This is a key point to the future plot events when she is asked to marry Paris it gives her less time and applies pressure to her to make a decision. This means that she has no option but to take the potion that believes that she is dead and Romeos death because of it. Richard Ryan ...read more.