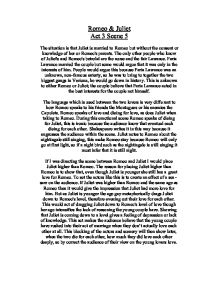 Romeo & Juliet Act 3 Scene 5 The situation is that Juliet is married to Romeo but without the consent or knowledge of her or Romeo's parents. The only other people who know of Juliet's and Romeo's betrolal are the nurse and the fair Lawance. Faria Lawance married the couple but some would argue that it was only in the interests of him. People would argue this because Faria Lawance was an unknown, non-famous enterty, so he was to bring to together the two biggest gangs in Veriona, he would go down in history. This is unknown to either Romeo or Juliet; the couple believe that Faria Lawance acted in the best interests for the couple not himself. The language which is used between the two lovers is very different to how Romeo speaks to his friends the Montugues or his enemies the Capulets. Romeo speaks of love and dieing for love, as does Juliet when taking to Romeo. During this emotional scene Romeo speaks of dieing for Juliet, this is ironic because the audience know that eventual each dieing for each other. Shakespeare writes it in this way because it engrosses the audience within the scene. Juliet notes to Romeo about the nightingale still singing, this make Romeo stay because Romeo will only go at first light, so if a night bird such as the nightingale is still singing it must infer that it is still night. ...read more.

But as Lady Capulet starts to dictate to Juliet about her marriage to Paris lady Capulet should start walk Juliet backwards into a corner looking down at her. This shows machismo over another, Juliet should start to look more and more timid as Lady Capulet's speech goes on. But when Juliet starts to released her true feelings bluntly then Juliet should become wider and more facially aggressive to her mother. To counter Juliet Lady Capulet should pull herself back from being the aggressor to become confused and dismayed at her daughter's conduct. The actors should stay in these positions throughout Juliet's comeback but change rolls as soon as Capulet comes in. Capulet comes into the bedroom with the nurse; Capulet is still under the impression that Juliet is morning her cousin's death. Lady Capulet then goes on to explain to Capulet how Juliet will not marry Paris. Lady Capulet further explains to Capulet that Juliet's love lies not with Paris but Romeo. Capulet then starts to lash out at Juliet, Juliet then becomes rejected from her father for want he believes is a disgrace to their family by loving a Montague. The Language used by Capulet in this scene is extremely course and offensive against Juliet. Capulet uses such lines as "Out, you green-sickness carrion! ...read more.

This would signify the real connection between the nurse and the child. As the nurse's speech continues and she speaks of leaving Romeo for Paris, Juliet should pull her head away from the blouse and her facial expression should change to confusion. The nurse should always be under the impression that Juliet is understanding and agreeing with everything that she is saying. So to conclude the language within each duologue changes as the characters become more and more aware of their situations. Most of the duologues start with a depression about Juliet's cousin's death and moves onto Juliet being blamed for the loved of a rival. Son the movement of the scene is split up into 4 duologues. Each duologue is about the same person, Romeo, but the way in which each duologue are spoken changes from character to character. The themes and ideas expressed within the scene can be related in today's' society. The themes such as loving another which displeases the parents can be related to very common events which happen in households across the world. For example; the marriage between to ethnic groups may displease some people saying how it is wrong, you should never marry out of your race. So in that sense Romeo and Juliet is a story way ahead of its time, it's a story which is applicable to years ago and years to come. ...read more.