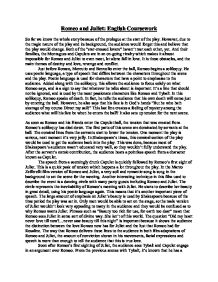 Romeo and Juliet: English Coursework So far we know the whole story because of the prologue at the start of the play. However, due to the tragic nature of the play and its background, the audience would forget this and believe that the play would change. Both of the "star-crossed lovers" haven't met each other, yet. And their families, the Montagues and Capulets are in an on-going rivalry which makes it almost impossible for Romeo and Juliet to even meet, let alone fall in love. It is these obstacles, and the main themes of destiny and love, revenge and conflict. Just before Romeo, Mercutio and Benvolio enter the ball, Romeo begins a soliloquy. He uses poetic language, a type of speech that differs between the characters throughout the scene and the play. Poetic language is used for characters that have a point to emphasise to the audience. Added along with the soliloquy, this allows the audience to focus solely on what Romeo says, and is a sign to say that whatever he talks about is important. It's a line that should not be ignored, and is used by the most passionate characters like Romeo and Tybalt. In this soliloquy, Romeo speaks of death. In fact, he tells the audience that his own death will come just by entering the ball. However, he also says that his fate is in God's hands "But he who hath steerage of my course Direct my sail!" This last line creates a feeling of mystery among the audience what will his fate be when he enters the ball? ...read more.

"You are a saucy boy!" In previous scenes, Tybalt has proven that he's a reckless, angry young man. He likes to maintain his bad boy image. For example, his demeanour in Baz Luerrman's version of Romeo and Juliet is very suave. In the opening fighting scene, a conversation between himself and Benvolio leads to a huge fight. However, one of the most important things he said in an angry tone of voice was "Peace...I hate the word". So from his reckless actions, forceful angry voice, and choice of words, the audience can see that Tybalt is belligerence and hot-headedness is very strong. He has convinced himself that he is a man, therefore is. Back to Capulet, he continues to verbally attack Tybalt. In both film adaptations, Capulet's voice becomes less gleeful and more serious. He begins to play a more paternal role towards Tybalt in this scene. Insults such as "You are a princox (insolent young man)" and "goodman boy (unmannerly child) are what Tybalt does like to be addressed as. The last and most important section to this argument is what he says to the audience. "Patience perforce with...greeting" is Tybalt expressing his emotions. He doesn't like that fact that he can do nothing to his greatest enemy inside his own house because of Capulet's orders. The rhyming here is important to address the audience. "I will withdraw...bitter gall", continues to explain how Tybalt feels. He continues to say he won't fight with Romeo right now, but eventually he will. ...read more.

In terms of how we see the characters at this moment in time, Romeo is seen in the audience's viewpoint as a heroic character, trying be the man, the protector, the "rock" for Juliet and personally believes that it's fate that they are together and it's fate for them to stay together and that's the feeling that Romeo conveys to audience in the conviction of his words and the poetic language he uses when referring to, or directly addressing Juliet. The furious Tybalt in many retrospects can be seen as very similar to Romeo but plays the villain in this scenario. He doesn't want to protect Juliet, he wants to protect his honour, his name and prove he is more than a "saucy boy". He is convinced he is a man, and now needs to prove it by carrying out his threats onto the Montagues and Romeo. The audience however sees exactly what the character called Capulet sees; Tybalt is nothing more than an angry boy who focuses too much on how others see him - almost shallow. In conclusion, at this stage of the play, Romeo and Juliet are caught in the middle of controversy, history and rivalry which allow for the readers to become enthralled in the storyline and makes for a successful written story, and a decently made film adaptation. I have examined the dramatic impact of the Capulet Ball scene and the Balcony scene and expressed how the characters and the language used together create some of the most important moments of the play. ...read more.