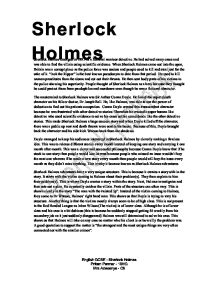 Sherlock Holmes emerged in 1893 as a fictional amateur detective. He had solved many cases and was able to find the villain using scientific evidence. When Sherlock Holmes came out into the open, Britain was a corrupt place as the police force was useless and people used to kill and steal just for the sake of it. "Jack the Ripper" is the best known pseudonym to date from that period. He used to kill women prostitutes from the slums and cut out their throats. He then sent body parts of his victims to the police showing his superiority. People thought of Sherlock Holmes as a hero because they thought he could protect them from paedophiles and murderers even though he was a fictional character. The mastermind to Sherlock Holmes was Sir Arthur Conan Doyle. He based the super sleuth character on his fellow doctor, Dr Joseph Bell. He, like Holmes, was able to use the power of deduction to find out his patients occupation. Conan Doyle created this transcendent character because he was frustrated with other detective stories. Therefore he created a super human like detective who used scientific evidence to solve his cases unlike coincidence like the other detective stories. This made Sherlock Holmes a huge success story and when Doyle killed off the character, there was a public up roar and death threats were sent to his house. ...read more.

I believe this is a 3 pipe problem" This emphasises the amount that he smokes. "3 pipe problem" means he will have to smoke three pipes before he will get the answer which implies that it is a very difficult issue. This is because a determined and intellectual person like him doesn't struggle with much. The quotation in the paragraph above also shows us the way Holmes treats Watson. Holmes treats him like a child who doesn't know much. Another quote to back up the matter is "My dear doctor, this is a time for observation, not for talk. We are spies in an enemy's country". This is when Holmes replies to Watsons question with an unclear answer. It shows us how disrespectful Holmes can be and that Holmes feels that Watson has a lot to learn. Watson plays the role of the narrator and hooks the reader. Another role of his is the foil. He makes Sherlock Holmes look better. "You reason it out beautifully. I exclaimed in unfeigned admiration. It is so long a chain, and yet every link rings true." This extract quoted from Watson, admires Holmes professionalism. It also highlights his deductive skills and scientific methods. Another thing Watson does is draw the mission to a satisfactory conclusion. This is also shown in the quote above. ...read more.

Holmes' determination is probably the most important part of all Sherlock Holmes adventures. It is shown in all the stories I have read and has helped solve all 3 of the cases. This is because he always perseveres through the tough and easy times. The most iconic out of the 3 stories I read was probably "The man with the twisted lip" This is because it took him so long to figure out who the criminal was. Instead of turning his back on the case, he persevered and solved the case. He did this with sheer determination. In the end, the criminal was the victim (Neville St Clair). Overall, Sherlock Holmes is a magnificent character. This is because many people thought he was a real person. This shows how good Doyle's writing was. Holmes also gave Victorian people hope as many murders and paedophiles lurked the streets. He even was a role model for the police force as trainee police officers were told to read them to show them how to catch criminals. Sherlock Holmes will be remembered for many centuries to come and his scientific way of thinking has been adopted by police forces. He will always be renowned as the greatest fictional and non-fictional detective the world has ever known. Baker Street also has a house where people post messages to Sherlock Holmes as that is where he is believed to have lived. ?? ?? ?? ?? English GCSE - Sherlock Holmes Pritam Parmar - 10HG Mrs Adesanya - C8 ...read more.