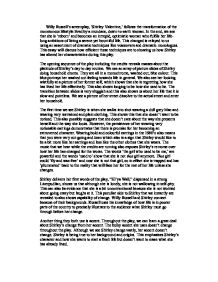 Willy Russell's screenplay, 'Shirley Valentine,' follows the transformation of the monotonous lifestyle lived by a mundane, down-to-earth woman. In the end, we see that she is 'reborn' and becomes an intrepid, optimistic woman who fulfils her life-long ambitions of living a serene yet bountiful life. This changed is relayed to us using an assortment of dramatic techniques like voiceovers and dramatic monologues. This essay will discuss how efficient these techniques are to showing us how Shirley has altered her characteristics during this play. The opening sequence of the play including the credits reveals masses about the platitude of Shirley's day to day routine. We see an array of picture slides of Shirley doing household chores. They are all in a monochrome, washed out, blue colour. This blue portrays her washed out feeling towards life in general. We also see her looking wistfully at a picture of her former self, which shows that she is regretting how she has lived her life effectively. This also shows longing to be how she used to be. The transition between slides is very sluggish and this also shows us about her life that it is slow and pointless. We see a picture of her street dissolve to the actual street and enter her household. ...read more.

Throughout the play, we can learn a great deal about Shirley's change from her accent. The bulky accent she uses doesn't change throughout the play. Although we see Shirley change vastly, her accent doesn't change. Shirley is being true to her background and origins. This emphasises Shirley's character and how she wants to start a fresh life but doesn't want to erase what she has already lived. This is shown in full effect when she is on the boat with Costas and says "Shirley Valentine is loop the fuckin' loop!" This is when we see that Shirley has gone through a change and become as daring and audacious as she was when she was young. Nevertheless she is still using working-class language to express herself. This does show us that she doesn't want to amend what she has formerly been through as it is a trademark of her life lived. The minor characters in the play also are used successfully to outline Shirley's change. The way she relates with these characters depicts to us how they respect her and what this means for the new Shirley. Before the Greece trip, we see that Shirley was not appreciated by her friends and family and was treated like a servant. ...read more.

However, despite her persistence she is still left down-hearted and we witness the first lifestyle change in Shirley and she becomes wayward. This all changes when she meets up with her previous arch-nemesis, Marjorie Majors. Marjorie shows her some affection. This situation only arises because Marjorie and Shirley share their life stories. We know that Shirley only picked on Marjorie because she was jealous of her and had dreams of becoming an air-hostess, supposedly like Marjorie. When Marjorie reveals the truth that she is a hooker and she in fact was also jealous of Shirley. This is quite heart-rending because suddenly we realise both these woman are unsatisfied in life because they believed that others were better then them. This fact accompanied with the affection shown by Marjorie, that Shirley misses in her day to day life, makes her ponder whether her life is heading up the right path or not. This becomes Shirley's lowest point of the play. This is also shown by the weather. The rain is falling and when we see her heading home, her silhouette is all we see of her and the footsteps are all we hear. Because we can only hear her footsteps, this shows that she is alone and there is no-one around her. However, this part of the play and film can also be identified as the turning point for Shirley's life. ...read more.