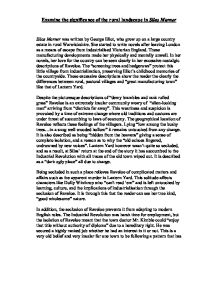 Silas Marner was written by George Eliot, who grew up on a large country estate in rural Warwickshire.

Silas Marner was written by George Eliot, who grew up on a large country estate in rural Warwickshire. She started to write novels after leaving London as a means of escape from industrialised Victorian England. These manufacturing developments made her physically and mentally unwell. In her novels, her love for the country can be seen clearly in her excessive nostalgic descriptions of Raveloe. The "screening trees and hedgerows" protect this little village from industrialization, preserving Eliot's childhood memories of the countryside. These excessive descriptions show the reader the clearly the differences between rural, pastoral villages and "great manufacturing town" like that of Lantern Yard. Despite the picturesque descriptions of "dewy brambles and rank rufted grass" Raveloe is an extremely insular community weary of "alien-looking men" arriving from "districts far away". ...read more.

This solitude affects characters like Dolly Winthrop who "can't read 'em" and is left untouched by learning, culture, and the implications of industrialisation through the seclusion of Raveloe. It is through this that the reader can see her true kind, "good wholesome" nature. In addition, the seclusion of Raveloe prevents it from adapting to modern English roles. The Industrial Revolution was harsh time for employment, but the isolation of Raveloe meant that the town doctor Mr. Kimble could "enjoy that title without authority of diploma" due to a hereditary right. He was secured a highly ranked job whether he had an interest in it or not. This is a very old belief and very insular for one town to be following a pattern that has completely changed within the whole of Britain. ...read more.

Eppie, something that may have seemed impossible after losing his "guineas...a golden wine" of joy, brings the unsociable, outcasted weaver into a natural world of beauty which be seen in descriptions of Silas Marner's garden and of the sunshine growing "strong and lasting". This new world of natural beauty is all brought about by Eppie, which is strongly contrasted to the dull setting when Silas was driven by money. In conclusion, there is a definite sense of realism through her construction of character and the rural setting which shapes these characters. The characters are all very life like to those of a little Victorian England village. Eliot depicts them carefully through intricate detail as she reminisces about a past time and place. The characters all are very different but then that is what gives Silas Marner the sense of realism. Examine the significance of the rural landscape in Silas Marner ...read more.