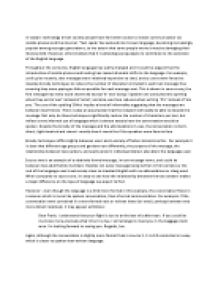 ﻿In today's technology driven society people have far better access to instant communication via mobile phones and the internet. 'Text speak' has evolved into its own language, becoming increasingly popular among younger generations, to the extent that some people worry it may be damaging their literacy skills. However, others believe that it is allowing young people to contribute to the evolution of the English language. Throughout the centuries, English language has subtly changed and it could be argued that the introduction of mobile phones and texting has caused dramatic shifts to the language. For example, until quite recently, text messages were relatively expensive to send, and so users were forced to develop brevity techniques to reduce the number of characters included in each text message thus ensuring they were paying as little as possible for each message sent. This is shown in source one; the first message has every word shortened except 'hi' and 'doing.' Speaker one used phonetic spelling when they wrote 'wot' instead of 'what', and also used two rebuses when writing 'R U' instead of 'are you.' ...read more.

If you could let me know more precisely what time it is due, I will arrange to meet you in the baggage claim area. I'm looking forward to seeing you. Regards, Joe. Again, although the conversation is slightly more formal than in source 1, it is still conducted in a way which is closer to spoken than written language. Lots of the linguistic devices used in texting attempt to reproduce spoken language used in face-to-face conversations, but I believe the once which succeeds most in doing this is the emoticon. Emoticons can be added into texts to show feeling or to replicate a facial expression. For example, a sad face ':('. Emoticons are a very quick and simple way of communicating quite a complex thing, and does the same job as a facial expression would in a face-to-face conversation or as a tone of voice would in a phone call. As well as showing feeling, emoticons can also be used to avoid misinterpretation of a message, for example, 'ok:)' ...read more.

In conclusion, I believe that text language is neither contributing to or destroying the English language, but enriching and extending it. Currently, they are on par and neither will surpass the other. Text language is based only on English, and to have the skills to understand it means that first you must be able to understand standard English. A French speaker, for example, would have an extremely hard time trying to decode a text conversation between two English teenagers. Like the relationship between English language and French language, they must stay separate. Each has a different time to be used. Standard English will continue to be used in formal writing and schools, while text language will stick to mobile phones and internet conversations, where the language has a looser structure, free of grammar and punctuation rules, with the only purpose being a quicker, more informal means of communication. The examples I have used above show that the language used in digital communications such as Facebook, Twitter and other popular social networks - and especially in "text-speak", are undeniably closer to the spoken language than more formal, written communications. source one source two ...read more.