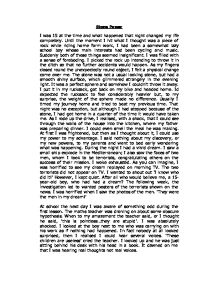 Stone Power I was 15 at the time and what happened that night changed my life completely. Until the moment I hit what I thought was a piece of rock while riding home form work, I had been a somewhat lazy school boy whose main interests had been cycling and music. Suddenly both of these things seemed insignificant. I was filled with a sense of foreboding. I picked the rock up intending to throw it in the ditch so that no further accidents would happen. As my fingers closed round the unexpectedly round object, I felt a physical change come over me. The stone was not a usual looking stone, but had a smooth shiny surface, which glimmered strangely in the evening light. It was a perfect sphere and somehow I couldn't throw it away. I put it in my rucksack, got back on my bike and headed home. Id expected the rucksack to feel considerably heavier but, to my surprise, the weight of the sphere made no difference. Usually I timed my journey home and tried to beat my previous time. That night was no exception, but although I had stopped because of the stone, I had got home in a quarter of the time it would have taken me. ...read more.

As there wasn't much time, the meeting was arranged for the next day. The meeting went well and I was amazed and relieved that my story was taken so seriously. My experience with the terrorists added strength to what I was saying. He said he would take action and inform the Columbians whose spies, he hoped, would corroborate my story. A sense of satisfaction that I might have saved lives was with me all the way home. The next few weeks were uneventful. On the way to the cycle exhibition in Birmingham, I sat next to a businessman, who was working on his laptop. I couldn't help glancing at it but it was in a foreign language, which meant nothing to me. Once again my mind was filled with pictures and words. I couldn't believe what I was seeing and hearing. Even to imagine such a terrible deed was beyond belief. This was even more terrifying than 'The War of The Worlds', which had so impressed me in the past. This man's plan would cause terror and panic in New York. After the suffering and fear of September 11th attack in 2001, it seemed doubly cruel. ...read more.

The stone was getting smaller! I remembered that at first I had needed to use both hands to hold it and now it was the size of an orange and much lighter. I wondered if the energy it needed to stimulate my brain had diminished the stone or whether it had been gradually getting smaller by the day. Once school had finished, we went to Switzerland. Snowboarding had taken up most of my time so I barely thought of the stone. There were no incidents out of the ordinary. My life was again like that of a normal 15 year old, whose interests consisted of cycling and music. I felt more relaxed. When I had thought of the stone I only wished it would disappear. Despite the fact that I had helped save innocent people, the stone, was an awful strain, and brought huge responsibility with it. Not only that but it seemed to separate me from my friends. Although I'd experienced great excitement and achievement, I wanted to be 'normal' again. When I got home I looked at the stone. It was now the size of a large marble. I really hoped its powers had faded. That night I expected to sleep soundly. However, I woke suddenly after a vivid dream. I had seen the Prime Minister in danger... ...read more.