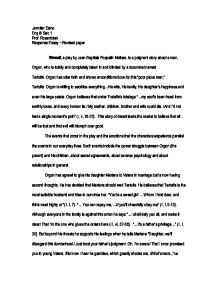 Jennifer Zaino Eng 8/ Sec 1 Prof. Rosenblum Response Essay ~ Revised paper Tartuffe, a play by Jean-Baptiste Poquelin Moliere, is a poignant story about a man, Orgon, who is totally and completely taken in and blinded by a scoundrel named Tartuffe. Orgon has utter faith and shows unconditional love for this "poor pious man," Tartuffe. Orgon is willing to sacrifice everything...his wife, his family, his daughter's happiness and even his large estate. Orgon believes that under Tratuffe's tutelage "...my soul's been freed from earthly loves, and every human tie:/ My mother, children, brother and wife could die, /And I'd not feel a single moment's pain" (I, v, 18-20). This story of deceit leads the reader to believe that all will be lost and that evil will triumph over good. The events that occur in the play and the emotions that the characters experience parallel the events in our everyday lives. Such events include the power struggle between Orgon (the parent) and his children, about secret agreements, about reverse psychology and about relationships in general. Orgon has agreed to give his daughter Mariane to Valere in marriage but is now having second thoughts. He has decided that Mariane should wed Tartuffe. ...read more.

But Orgon insists that Tartuffe, is the honest and fair person he believes him to be and even gives him "...Clear deed and title to everything I own" (III, vii, 38). This reverse psychology worked on Orgon and I hoped would work on my mom. One day when I was shopping with my mother, I badly wanted a pair of shoes that I saw in a fashion magazine and were expensive. I knew that my mom would not pay for them and would suggest that I get another pair of shoes that was more reasonably priced. When we got to the store she did exactly as I thought. She said "no" to the pair that I wanted because she really disliked them and picked out a different pair that she thought I might like. I said fine, whatever, and put a pout on my face because I was not getting the pair that I wanted. They really were not that bad and fit better than the expensive ones but they were not the trendy new expensive ones that I had my heart set on. But she was the one using reverse psychology. She told me that I could have the more expensive ones if I really wanted them. ...read more.

But even Orgon cannot change his mother's mind. Madame Pernelle defends Tartuffe. She will not be swayed and insists that "Till his guilt is clear, / A man deserves the benefit of the doubt. / You should have waited, to see how things turned out (V, iii, 45-47). Peer pressure is difficult to overcome. My first real experience with peer pressure was when I was away at school. My roommate was into marijuana and tried to convince me that a joint would enhance my outlook and I would begin to relax. My other friends tried to convince me that the "bar scene" was cool and that drinking would make me less up tight. But I know for me that drugs and alcohol are not for me. I am pleased to say that I did not give into peer pressure and Yes, I am the designated driver. As one can see, the events that the characters encounter in Moliere's play Tartuffe are as timely today as when they were written. We can all identify and empathize in one way or another with his characters and the situations they find themselves in. Even though Orgon seems like a weak, uncaring father and husband, he ultimately shows his true love for his family and apologizes for his poor judgment. The play is a wonderful example of family life. ...read more.