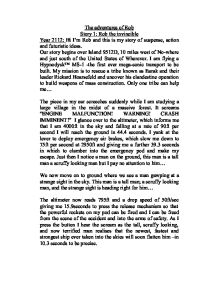 The adventures of Rob.

The adventures of Rob Story 1: Rob the invincible Year 2112: Hi I'm Rob and this is my story of suspense, action and futuristic ideas. Our story begins over Island 9512D, 10 miles west of No-where and just south of the United States of Wherever. I am flying a Hypnodysk(tm) MS-1 -the first ever mega-sonic transport to be built. My mission is to rescue a tribe known as Earak and their leader Rickard Hoarsefeld and uncover his clandestine operation to build weapons of mass construction. Only one tribe can help me... The piece in my ear screeches suddenly while I am studying a large village in the midst of a massive forest. It screams "ENGINE MALFUNCTION! WARNING! CRASH IMMINENT!" I glance over to the altimeter, which informs me that I am 4000ft in the sky and falling at a rate of 90ft per second I will reach the ground in 44.4 seconds. I yank at the lever to deploy emergency air brakes, which slow me down to 75ft per second at 2950ft and giving me a further 39.3 seconds in which to clamber into the emergency pod and make my escape. ...read more.

Furthermore in answer to your latter question, your current circuits are obsolete and are over 100 years old!" Tonie takes my hand and pulls me to the edge of the village. When he speaks he tells me: "You revealed to me your secret now it's my turn to reveal my secret. "When you placed us on this island, we developed ways to evolve our molecular computers using DNA and now our circuits not only allow us to have a mind of our own, but we can maintain ourselves and develop technology faster than mankind." I'm dumfounded. I can't believe how a robot designed by man, could exceed man's own technological abilities, on its own. "This is incredible!" I exclaim. "Let me show you the rest of the village." We step through vast steel gates and the view that passes through my eye is astounding. Every street coated in brilliant shiny metal of all colours; gold, silver, bronze even copper. The people in the street varied between great metallic dames all the way down to the lowest of the low, the tramps, the buskers and even robotic robbers. ...read more.

"In theory, yes" "And in practice?" "You'll meet loads of new people, visit other countries and generally be famous just like all your greatest heroes." "I would quite like that actually." "Then what are you waiting for the ship that will be taking us should be ready in the morning and we can leave as soon as we can." "But what about all my friends and family. What about Jon my butler I can't leave them!" "Bring them along with you." "I see you've thought of everything let's pack!" The next morning as the sun rises I am the first one up checking that the ship is fixed. I managed to tell Tonie the truth, he was none too happy but he saw that I meant well and we stayed friends. That very morning at approximately 11:34:19 AM the ship lifts off laden with: fuel, plans, weapons of mass construction and most importantly the people, ready to finally take on the role for which they were built, the molecular powered world leaders to keep the peace. Not forgetting the genius that is Rickard Hoarsefeld. Join Rob and his new found friends in his next story Rob the Invisible coming to all bad bookshops near you. ...read more.