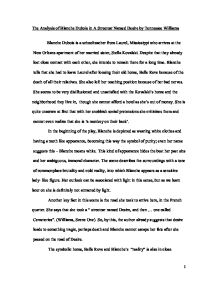 The Analysis of Blanche Dubois in A Streetcar Named Desire by Tennessee Williams Blanche Dubois is a schoolteacher from Laurel, Mississippi who arrives at the New Orleans apartment of her married sister, Stella Kovalski. Despite that they already lost close contact with each other, she intends to remain there for a long time. Blanche tells that she had to leave Laurel after loosing their old home, Belle Reve because of the death of all their relatives. She also left her teaching position because of her bad nerves. She seems to be very disillusioned and unsatisfied with the Kovalski's home and the neighborhood they live in, though she cannot afford a hotel as she's out of money. She is quite unaware at first that with her snobbish social pretensions she criticizes them and cannot even realize that she is 'a monkey on their back'. In the beginning of the play, Blanche is depicted as wearing white clothes and having a moth like appearance, becoming this way the symbol of purity; even her name suggests this - Blanche means white. This kind of appearance hides the best her past sins and her ambiguous, immoral character. ...read more.

Despite of avoiding light both symbolically and physically, she desires to be in the center of attention all the time. Again she uses her body to attract, the only occasion when she intentionally moves into the light: to expose her fleshly charms and to arouse the attention of the present men. Although, Blanche proves to be a morally rotten character, she is definitely deterred by the coarse behaviour of Stanley, who beats Stella under the effect of alcohol. The domestic violence she witnesses alienates her from this environment. What eventually points out that she's an outsider is her failure to protect Stella and to convince her that this man would not bring her happiness. But Stella's incomprehensible return into Stanley's arms explains clearly that their marriage is based on pure physical attraction. Blanche is amazed and confused, becoming a threat to their marriage. At this point she begins to feel her desperate situation and her dark past life piles up on her. In scene 6 her last hope is presented, Mitch, as I mentioned earlier. She hopes to capture him by presenting herself as a young, innocent and na�ve girl. He, who seems to aspire to some higher value and takes care of his ill mother is happy to find a worthy woman to be his wife. ...read more.

The last moment of the play when Blanche is taken to the mental institution echoes her life philosophy: as she leaves, she says, " I have always depended on the kindness of strangers" (Williams, Scene Eleven), and she goes with the doctor who is a stranger and seems to be a gentleman. Her life was ruined by a man and ends in another man's hands. Her illusions, aristocratic sensibilities and desperate search for emotional stability had no place in a world of Kovalskis, where illusions must be destroyed and primitive desires dominate. On the whole, there remains only one question about Blanche's real nature: what kind of person was she, a depraved, wicked woman who fell in her own trap or an innocent, na�ve girl in a world that is not able of understanding and compassion? Probably she would like to be such a girl but the unfortunate events of her life and her weak character lead her on the wrong way. Despite the wish to dominate and seduce all men, she ended as an object in their hand. She needed them to survive because a woman could not live a successful life on her own those days (?), so became inferior to them. Blanche is unable to get over the past and she fails to face the present or the future, thus slips into insanity. ...read more.