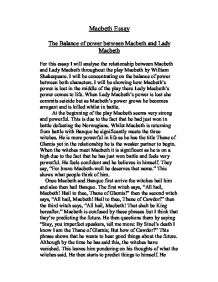 The Balance of power between Macbeth and Lady Macbeth

Macbeth Essay The Balance of power between Macbeth and Lady Macbeth For this essay I will analyse the relationship between Macbeth and Lady Macbeth throughout the play Macbeth by William Shakespeare. I will be concentrating on the balance of power between both characters. I will be showing how Macbeth's power is lost in the middle of the play there Lady Macbeth's power comes to life. When Lady Macbeth's power is lost she commits suicide but as Macbeth's power grows he becomes arrogant and is killed whilst in battle. At the beginning of the play Macbeth seems very strong and powerful. This is due to the fact that he had just won in battle defeating the Norwegians. Whilst Macbeth is returning from battle with Banquo he significantly meets the three witches. He is more powerful in life as he has the title Thane of Glamis yet in the relationship he is the weaker partner to begin. When the witches meet Macbeth it is significant as he is on a high due to the fact that he has just won battle and feels very powerful. He feels confident and he believes in himself. They say, "For brave Macbeth-well he deserves that name." ...read more.

I think that this makes him more determined to do it to show that he's a man. This then shows that she can manipulate him. As the play was written in the times of King James 1st, the audience would have been shocked by the determination and attitude towards the murder. As she says to Macbeth "How tender 'tis to love the babe that milks me: I would, while it was smiling in my face, Have pluck'd my nipple from his boneless gums, And dash's the brains out, had I sworn as you." She says this to prove to Macbeth that she had the courage so why hasn't he? The more comments that she had made and the stronger she got, the more horrified the audience would be due to the nature of this woman. This is what makes her so different to the stereotypical woman of the times. Another thing that she had done to show that she was more powerful in the relationship was stopping her husband from speaking. He says, "If we should fail-" and she breaks him by saying "But screw your courage to the sticking-place." Also in these times a woman would not even consider killing her husband let alone the king. ...read more.

Although it is Macbeth that murders Duncan it is Lady Macbeth that arranges the whole scheme. This then shows that the role of power has shifted to make Lady Macbeth look the greater out of the two. The murder of Duncan has tested both characters' insanity. Macbeth hires' two murderers to kill his friend Banquo. After that he becomes even more insane. He begins to see the ghost of Banquo. In the middle of a dinner he begins to shout at the ghost. After that Lady Macbeth also starts seeing things. She sees blood on her hands and tries to wash it off whilst she is sleep walking. These are her dreams. As Lady Macbeth's sanity is deteriorating, Macbeth is making the most of the fact that he is King. He is murdering people without a care in the world. He grows more and more confident and in the end he dies from his own gullibility. The audience expect to see both characters die as they were evil and committed treason. Treason was a very serious thing in those days and they had to be brought to justice, especially if they had done wrong to a king, as kings were highly thought of. If anyone had done wrong against them, they deserved to die. The two protagonists abuse of power ultimately led to their deaths. ...read more.