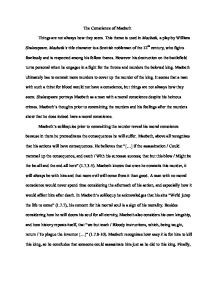 The Conscience of Macbeth

The Conscience of Macbeth Things are not always how they seem. This theme is used in Macbeth, a play by William Shakespeare. Macbeth's title character is a Scottish nobleman of the 12th century, who fights fearlessly and is respected among his fellow thanes. However his destruction on the battlefield turns personal when he engages in a fight for the throne and murders the beloved king. Macbeth ultimately has to commit more murders to cover up the murder of the king. It seems that a man with such a thirst for blood would not have a conscience, but things are not always how they seem. Shakespeare portrays Macbeth as a man with a moral conscience despite his heinous crimes. Macbeth's thoughts prior to committing the murders and his feelings after the murders show that he does indeed have a moral conscience. Macbeth's soliloquies prior to committing the murder reveal his moral conscience because in them he premeditates the consequences he will suffer. Macbeth, above all recognizes that his actions will have consequences. ...read more.

Finally, Macbeth thinks of the king, the innocent man he is about to murder. Sympathetically Macbeth acknowledges that he is the king's kinsmen and noble "Who should against his murderer shut the door, / Not bear the knife [himself]" (1.7.15-16). Most evil men capable of murder never think of the victim, but Macbeth is a man with a moral conscience, a man who recognizes his disloyalty and a man who despite committing heinous acts recognizes that they are wrong before he commits them. The Depth of Macbeth's moral conscience is revealed when he begins to feel guilt and remorse after he commits the murders. Almost immediately after Macbeth kills the king he begins to regret his actions, crying out, "Wake Duncan with thy knocking! I would thou couldst!" (2.2.73). Macbeth's morality is reflected in his sense of remorse both in the moment and as he looks back on the night. Macbeth becomes paranoid and in return murders the two guards who stand at the king's chambers so that he could cover-up his pervious actions. ...read more.

Macbeth honestly believes that he is seeing Banquo, his guilty conscious has driven him to have psychotic outburst in front of his subjects. However his tirades are furthermore evidence of the guilt he is suffering and the moral conscience that he still maintains, despite his heinous crimes. A choice takes moments to consider, and seconds to carry out, however its consequences will stay for all eternity. Macbeth contemplated his choice and within a few moments he went from a loyal noble to a betraying king, his conscience brought him to premeditate the consequences of his actions but by defying his moral conscious he suffered devastating guilt. Most men who commit heinous crimes do not have moral consciences and do not consider how their actions will affect their victims or how their actions will inflict on their own lives. Most men who kill do not suffer guilt afterwards, but Macbeth is not most men, he has a conscience, proof that things are not always how they seem. ...read more.