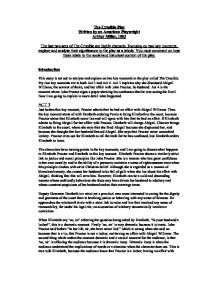 The Crucible - analysing acts 3 and 4.

The Crucible Play Written by an American Playwright Arthur Miller, 1953 The last two acts of The Crucible are highly dramatic. Focusing on two key moments, explore and analyse their significance to the play as a whole. You must comment on how these relate to the social and historical context of the play. Introduction This essay is set out to analyse and explore on two key moments in the play called The Crucible. My two key moments are in both Act 3 and Act 4. Act 3 explains why she dismissed Abigail Williams, the servant of theirs, and her affair with John Proctor, he husband. Act 4 is the moment where John Proctor signs a paper showing his confession that he was seeing the Devil. Now I am going to explain in more detail what happened ACT 3 Just before this key moment, Proctor admits that he had an affair with Abigail Williams. Then the key moment starts of with Danforth ordering Parris to bring Elizabeth to the court, because Proctor states that Elizabeth never lies and will agree with him that he had an affair. If Elizabeth admits to firing Abigail for her affair with Proctor, Danforth will charge Abigail. Cheever brings Elizabeth to the court, where she says that she fired Abigail because she displeased her, and because she thought that her husband fancied Abigail. She says that Proctor never committed lechery. Proctor cries out for Elizabeth to tell the truth for he has confessed, but Danforth orders Elizabeth to leave. The characters have turning points in the key moments, and I am going to discuss what happens to Elizabeth Proctor and Danforth in this key moment. Elizabeth Proctor shares a similarly strict link to justice and moral principles like John Proctor. She is a woman who has great confidence in her own morality and in the ability of a person to maintain a sense of righteousness even when this principle clashes with strict Christian belief. ...read more.

But there is another side to her, she could be so cold, and evil that she would say that he is not a lecher, not to agree with Proctor, and to keep the secret held up. She already knows the secret, and Proctor knows that she knows, which makes Proctor feel even guiltier. When she said "No, sir", this is relevant to what is going to happen in the fourth Act. Danforth now assumes that Abigail is not a 'w***e', (prostitute), and thinks that Proctor is a lie. I believe Elizabeth did not know that he confessed, because when Proctor said "Elizabeth, I have confessed it!" then Elizabeth replies "Oh, God!" knowing that she said the wrong thing, letting Proctor down, and Hale who has changed, and know that the whole thing was not real. What is to come is that Proctor could be charged to lie, or something terrible could go on, that he has been accused of the Devil. ACT 4 Miller choose to have this moment, in Act 4, because it shows how Proctor dies after the moment. In this moment, Proctor is signing a confession to show he has met the Devil, and to say he has not had an affair, ...[PROCTOR now lays the paper down and signs his name]. It links what has gone before, because he was locked in jail, and this shows how he is going to save his life by signing a confession paper, "I confess to God, and God has seen my name on this! It is enough!" Not just because it is relevant in the story, but it is a good device for the audience as well, because it gives the audience a sense that he is heroic. With this scene it shows first how he gives up and signs a confession paper, but then he has a change of heart and rips the paper [hysterically, as though the tearing paper were his life], saying he has never seen the Devil. ...read more.

The whole thing about lechery and s****l interest can link to soaps and it is like a soap opera, and is artistically pleasing for the audience. The girls' hysteria gives play excitement and activity, something physical to watch if you do not understand the words. The play can appeal to religious people, for new views and ideas, historians, real events, and people young adults, for excitement women, for love story The first key moment in Act 3 was the best. It is full of tension and at the end of the moment it ends with dramatic irony and irony. This moment catches me as the audience, and the way Elizabeth avoids the question, builds my interest in the story. When she says 'No, sir' I wanted to go on, because I wanted to know what is going to happen now. The second key moment in Act 4 also was good; I found it hard for me as the audience. When he signed the paper of his confession, I though he has done the wrong thing, even though it is to save his life. Other people may disagree, but I think Hale was not so good as others would think. If I were him I would die a honourable man so I could be placed in history books, and known as a good man, instead of saving your life for a name. But then Proctor came to his senses and he changed his mind, which made the audience fell more relieved because he shows his true self, a heroic man, like Jesus, and dieing to show he is honourable and his loyalty with his friends who are going to be hanged. I have thoroughly enjoyed reading 'The Crucible', and even though it is about events that happened over 300 years ago, it still holds an uncanny relevance because, sometimes, we can see ourselves in Arthur Miller's characters. Perhaps 'The Crucible' can so relevant that it helps to stop terrible tragedies like the witch hunts happening again in the future. ...read more.