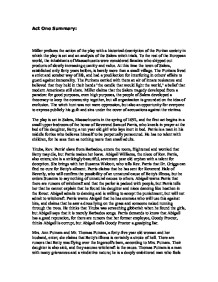 Act One Summary: Miller prefaces the action of the play with a historical description of the Puritan society in which the play is set and an analysis of the Salem witch trials. To the rest of the European world, the inhabitants of Massachusetts were considered fanatics who shipped out products of slowly increasing quantity and value. At this time the town of Salem, established only forty years before, is barely more than a small village. The Puritans lived a strict and somber way of life, and had a predilection for interfering in others' affairs to guard against immorality. The Puritans carried with them an air of innate resistance and believed that they held in their hands "the candle that would light the world," a belief that modern Americans still share. Miller claims that the Salem tragedy developed from a paradox: for good purposes, even high purposes, the people of Salem developed a theocracy to keep the community together, but all organization is grounded on the idea of exclusion. The witch hunt was not mere oppression, but also an opportunity for everyone to express publicly his guilt and sins under the cover of accusations against the victims. The play is set in Salem, Massachusetts in the spring of 1692, and the first act begins in a small upper bedroom of the home of Reverend Samuel Parris, who kneels in prayer at the bed of his daughter, Betty, a ten year old girl who lays inert in bed. Parris is a man in his middle forties who believes himself to be perpetually persecuted. He has no talent with children, for he sees then as nothing more than small adults. Tituba, Rev. Parris' slave from Barbados, enters the room, frightened and worried that Betty may die, but Parris makes her leave. Abigail Williams, the niece of Rev. Parris, also enters; she is a strikingly beautiful, seventeen year old orphan with a talent for deception. She brings with her Susanna Walcott, who tells Rev. Parris that Dr. ...read more.

Proctor tells Danforth that Mary Warren never saw any spirits, and he presents a deposition signed by Mary Warren that asserts this. Parris thinks that they have come to overthrow the court. Mary admits that it is pretense. Danforth questions Proctor, wondering whether he has any hidden pretense to undermine the court. Cheever tells Danforth how Proctor ripped up the warrant, but Proctor says that it was only out of temper. Cheever also tells Danforth how Proctor plows on Sunday and does not come to church. Proctor asks Danforth if it strikes him odd that these women have lived so long with such an upright reputation only to be accused. Danforth tells Proctor that his wife is pregnant; although Proctor did not know this, he tells them that Elizabeth never lies. Danforth agrees to let Elizabeth live another month so that she may show signs of pregnancy, and if she is pregnant she will live another year so that she may deliver. Proctor submits a deposition to Danforth signed by ninety-one citizens attesting to the good opinion of Rebecca, Martha Corey and Elizabeth. Parris demands that these ninety-one be summoned for questioning, and claims it is an attack on the court. Hale asks if every defense is an attack on the court, but Parris tells him that all innocent and Christian people are happy for the courts in Salem. Danforth reminds them that they live in a sharp time in which good and evil are now clear. Mary Warren begins to sob. Hathorne reads the deposition, and asks which lawyer wrote it, but Giles says that he wrote it. He has been a plaintiff in thirty-three court cases, and thus has great experience with it. Hathorne's father even tried a case of Corey's. Mr. Putnam arrives, and Danforth tells him that there is an accusation that he prompted his daughter to cry witchery upon George Jacobs. ...read more.

Mercy Lewis: She is the Putnam's servant, a fat, sly merciless eighteen year old girl whom Parris found naked when he spied the girls dancing in the woods. She runs away with Abigail at the end of the play. Susanna Walcott: She is one of the girls whom Parris found dancing in the woods, and a confidant of Abigail. Marshal Herrick: He is one of the local constables who guards the jail cells while nearly drunk. Hopkins: He is one of the guards at the jail cell. o About Arthur Miller o Character List o About The Crucible o Short Summary o Entire Summary and Analysis o Summary and Analysis of Act One o Summary and Analysis of Act Two o Summary and Analysis of Act Three o Summary and Analysis of Act Four o Links o Essays o Message Board o Author of ClassicNote and Sources o Test Yourself! 40 Question Quiz The Crucible (1953) The Crucible is an allegorical re-telling of the McCarthy era red scare that occurred in the United States after World War II. Based on historical accounts, the play is set during the 1692 Salem Witchcraft Trials when several young girls accuse innocent town members of witchcraft to avoid getting into trouble for entertaining ideas of witchery themselves. The husbands of some of the women involved try to convince the judges as to the girls' deceit, but find them unshakeable. Eventually even the most prominent members of the community find themselves indicted, and the tension mounts as the central protagonist, John Proctor, must confess an earlier adultery in order to save his own wife from being hanged based upon charges brought by his former lover. However, because his wife lies about the adultery to save his name, the judges fail to believe his charges. Proctor is given the chance to save his own life by confessing to witchery and naming names, but chooses to die rather than betray his friends and neighbours. ...read more.