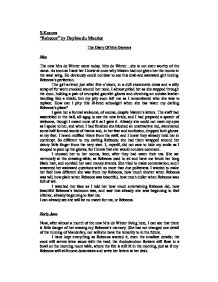 The Diary Of Mrs Danvers

S.Kocura "Rebecca" by Daphne du Maurier The Diary Of Mrs Danvers May The new Mrs de Winter came today. Mrs de Winter...she is not even worthy of the name. As soon as I saw her I knew at once why Maxim had not given her the rooms in the west wing. He obviously could not bear to see this drab and awkward girl ruining Rebecca's perfection. The girl arrived just after five o'clock, in a dull stockinette dress and a silly scrap of fur worn crooked around her neck. I almost pitied her as she stepped through the door, holding a pair of crumpled gauntlet gloves and clutching an outsize leather handbag like a shield, but my pity soon left me as I remembered who she was to replace. How can I pity this ill-bred schoolgirl when she has taken my darling Rebecca's place? I gave her a formal welcome, of course, despite Maxim's letters. The staff had assembled in the hall, all agog to see the new bride, and I had prepared a speech of welcome, though I meant none of it as I gave it. Already she could not meet my eyes as I spoke to her, and when I had finished she blushed an unattractive red, stammered some half formed words of thanks and, in her fear and confusion, dropped both gloves at my feet. I heard muffled titters from the staff, and I knew they already held her in contempt. So different to my darling Rebecca; she had them wrapped around her dainty little finger from the very start. I, myself, did not care to hide my smile as I stooped to pick up the gloves, for I knew that she would not dare comment. I showed her to her rooms, later, after they had eaten their tea. She sat nervously at the dressing-table, as Rebecca used to sit and have me brush her long black hair, and combed her own mousy strands. ...read more.

I had thought she had gone to the library, but she had hidden herself behind the door in the morning room as if she wanted to spy on us. I could tell Maxim had not told her of him, for she, trying in her childish way to be polite, asked him to stay to tea. He, always rash where my Rebecca was bold, nearly accepted, so that I had to give him a warning look. He still insisted on showing the girl his car. A sure way to impress the visit in her mind! I would not put it past her to go running to Maxim about him. Later, after Jack had left, I came back to Rebecca's bedroom, to see if anything had been left out of place, and found the new Mrs de Winter standing by the bed with Rebecca's golden coverlet on it. She said she had come to close the shutters, but I knew I had not left them open. She didn't know how well I knew those rooms, knew everything in them, so that I could see where she had opened the latch on the wardrobe, and taken Rebecca's night-dress out of its case where it was lying on the chair, just as it had been the day she died. She did not know the care I had taken with the rooms. She must have seen the flowers on the mantelpiece, just as my Rebecca would have put them, but she could not have known of how careful I am with my Rebecca's furs, to keep the moths from destroying them, or of the dusting I do every day, for I do not trust the maids. She soon learnt, though. I took her by the arm and showed her everything there, lead her around my Rebecca's rooms. I wanted her to see everything that was Rebecca's, see how inferior she was, even to my Rebecca's memory. ...read more.

They called me into the library, some time later. They wanted to know what her appointments for the day had been. I checked Rebecca's appointment book, and there was a name there I did not know. A man called Baker, and then a phone number in the back of the book. I did not know anyone called Baker, could not think why Rebecca could have wanted to see him. They rang the number, and found it was a Doctor Baker, retired now and living somewhere north of London. Mr Jack followed them, Mr and Mrs de Winter and Colonel Julyan, to Dr Baker's house the next day. The same doctor Baker she had been to see in London the day she died. She had cancer, he said, a growth, deep rooted. She only had three or four months left when she died. Why didn't she tell me? Her old Danny, who she used to tell everything? Why didn't she talk to me? They'll say she committed suicide, now, say she couldn't face such a painful death. But Mr Jack and I know the truth. Maxim killed her, killed my Rebecca. She would never have killed herself, not my brave Rebecca. It was he who drove those holes in the bottom of the boat, he who left the stopcocks open. He was jealous of her, like they all were, madly jealous of my lady, with her looks, her wit, her charm. He killed her, murdered my lady, because she was too beautiful, too graceful, too spirited. He thinks the law can't touch him now, he and his new bride. But there are other ways I can get to them, other ways I can cause him at least some of the pain he caused me, other ways I can repay him for my lady's death. I'll destroy the one thing I know he loves above all. His new bride may be Mrs de Winter in name, but she will never take my Rebecca's place at Manderley, her Manderley that she herself created. I shall not allow it. Goodbye, my Rebecca. Goodbye, Manderley. ...read more.