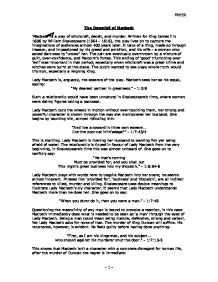 The Downfall of Macbeth 'Macbeth' is a play of witchcraft, deceit, and murder. Written for King James I in 1606 by William Shakespeare (1564 - 1616), the play lives on to capture the imaginations of audiences almost 400 years later. It talks of a King, made so through treason, and impassioned by his greed and ambition, and his wife - a woman who asked darkness to "unsex" her. The pair are eventually overthrown by a mixture of guilt, over-confidence, and Malcolm's forces. This ending of 'good' triumphing over 'evil' was important in that period; especially when witchcraft was a great crime and witches were burnt at the stake. The public wanted to see plays where truth would triumph, especially a reigning King. Lady Macbeth is, arguably, the essence of the play. Macbeth sees her as his equal, saying: "My dearest partner in greatness." - 1:5:9 Such a relationship would have been unnatural in Shakespeare's time, where women were dainty figures taking a backseat. Lady Macbeth puts the wheels in motion without ever touching them, her strong and powerful character is shown through the way she manipulates her husband. She begins by taunting him, almost ridiculing him: "And live a coward in thine own esteem... Like the poor cat in'th'adage?" - 1:7:43/4 This is startling. Lady Macbeth is likening her husband to wanting fish yet being afraid of water. The relationship is tipped in favour of Lady Macbeth from the very beginning, in Shakespeare's time this was almost unheard of. She goes on to tactfully say: "He that's coming Must be provided for, and you shall put This night's great business into my dispatch." - 1:6:64-6 Lady Macbeth plays with words here to beguile Macbeth into her snare; he seems almost innocent. Phrases like 'provided for', 'business' and 'dispatch', are all indirect references to killed, murder and killing. Shakespeare uses double meanings to illustrate Lady Macbeth's sly character. ...read more.

Macbeth, upon hearing of her demise, seems almost inconvenienced by it: "She should have died hereafter; There would have been time for such a word." - 5:5:16-7 A potent gap has been created between the pair by the murder, the incident at the dinner party and Macbeth's failure to inform Lady Macbeth of Banquo's murder show this. His final speeches all stem from this crucial point: They outline the meaningless and absurdity of existence: 'Life's but a walking shadow, a poor player/ That struts and frets his hour upon the stage/ And then is heard no more.' Once lady Macbeth dies, all of his earthly ambition becomes dust. This reinforces the point that she was his driving force, she justified and supported his existence, and his love for her - despite his growing distance from her - made her death all the more intolerable. Every so often, the imagery of clothing is used to bring out Macbeth's character and it's almost as if he's hiding behind these "borrowed robes." It's ironic that a man so distasteful, a murderer, should be dressed in royal robes. Shakespeare used this distinction to emphasise to the audience Macbeth's character: "Like our strange garments, cleave not to their mould." - 1:3:143 Shakespeare calls attention to the nature of his characters by way of contradiction, the taking of two opposite characters - Macbeth and Lady Macbeth, for instance - and comparing the two. "I have no spur/ to p***k the sides of my intent....We shall proceed no further with this business," from Macbeth in Act 1 in contrast to Lady Macbeth's, "When you durst do it then you were a man," puts 'white' against 'black'; the white looking whiter, the black looking blacker. The same technique of using contrast to bring out the characteristics of Shakespeare's creations can be found between Banquo and Macbeth, where Banquo too was given the prophecies but chose not to undertake them. ...read more.

Shakespeare's play of words become more apparent, by naming an aide of Macbeth 'Seyton' he emblazons the idea of Macbeth being the 'Evil' one, aided by witchcraft and The Devil. It's worthy to remember the message he was getting across to the people of his period: that evil does not pay and that disloyalty to the King is comparable to having tea with the Devil. What made Lady Macbeth, break down in such ways was her mentality. She had never met the witches, yet her desire was inflamed; she didn't carry out any of the murders, yet she relived them in her sleep, terrified of the darkness she once bid; she cajoled Macbeth into murdering Duncan and yet he battled on after her. Perhaps because she accepted their deeds were 'evil' and struggled to deal with them, while Macbeth deemed his actions just in the sense that he was pursuing something which was rightfully his. Macbeth's downfall is a moral lesson as was, I believe, Shakespeare's point throughout this play. Macbeth wanted more, and through a lucky happenstance at a battle a windfall of success came his way unbidden. The first prophecies of the three witches proved him a victim of his ambition; Macbeth was willing to forsake his morality, his loyalty, his faith - remembering 17th century Britain was predominantly catholic - all for a "Vaulting ambition which o'leaps itself". Where "the battle's lost and won", indecision has the only decisive victory. Evil does not become alive until it is endorsed by the will. As in Macbeth where the play begins with the witches, who we must suppose to be evil; but they only created potential evil, not actual. It is the human that takes it into his mind and makes it reality by a motion of the will. And Lady Macbeth put the wheels in motion - she drove him to be everything, and in some ways he was. He was both everything and nothing at all. Seeing life as: "...a tale told by an idiot, full of sound and fury Signifying nothing." - 5:5:26-7 FRYER - 1 - ...read more.