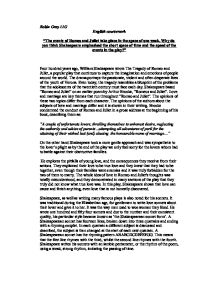 &quot;The events of Romeo and Juliet take place in the space of one week. Why do you think Shakespeare emphasised the short space of time and the speed of the events in the play?&quot;

Robin Gray 11G English coursework "The events of Romeo and Juliet take place in the space of one week. Why do you think Shakespeare emphasised the short space of time and the speed of the events in the play?" Four hundred years ago, William Shakespeare wrote The Tragedy of Romeo and Juliet, a popular play that continues to capture the imagination and emotions of people around the world. The drama portrays the passionate, violent and often desperate lives of the youth of Verona. Even today, the tragedy resembles a blueprint of the problems that the adolescents of the twentieth century must face each day. Shakespeare based "Romeo and Juliet" on an earlier poem by Arthur Brooke, "Romeus and Juliet". Love and marriage are key themes that run throughout "Romeo and Juliet". The opinions of these two topics differ from each character. The opinions of the authors about the subjects of love and marriage differ and it is shown in their writing. Brooke condemned the conduct of Romeo and Juliet in a prose address at the beginning of his book, describing them as: "A couple of unfortunate lovers, thralling themselves to unhonest desire, neglecting the authority and advise of parents...attempting all adventures of peril for the attaining of their wished lust (and) ...read more.

It was traditional during the Elizabethan age, for gentlemen to write love sonnets about their lover and give it to her. It was the way men used to woe women they liked. He wrote one hundred and fifty four sonnets and due to the number and their consistent quality, his particular style became known as 'the Shakespearean sonnet form'. A Shakespearean sonnet has fourteen lines, broken down into three quatrains and ending with a rhyming couplet. In each quatrain a different subject is discussed and described, the subject is then changed at the start of each new quatrain. A Shakespearean sonnet has the rhyming pattern ABABCDCDEFEFGG. This means that the first line rhymes with the third, whilst the second line rhymes with the fourth. Shakespeare writes his sonnets with an iambic pentameter, or the rhythm of the poem, using a weak, strong rhythm, imitating the passing of time. Robin Gray 11G In his language Shakespeare shows that he is influenced very strongly by the Italian poet Petrach. Examples of this are Romeo's love for Rosaline, which echoes the major theme of Petrach's poetry: a young mans unrequited love of an unattainable and disdainful woman. ...read more.

He does this where the same sound has different meanings. He was fascinated by puns and sometimes could not help himself by putting them in his plays. Here is an example where Mercutio revels in punning, often in a sexual nature: 'Ask for me tomorrow, and you shall find me a grave man'. William Shakespeare was a multi talented writer and poet who tried to the best of his ability to emphasise the quick movements of not only this play but also more importantly the times on which this play was based. Making the play take place in only a week does two things. Firstly it makes it more dramatic. Making it more dramatic also makes it more exciting and interesting for the audience and the reader. It also makes the story more intense as you always knew that lots of things were going to happen in one day. The fighting scenes and arguing scenes went very quickly whereas the slower scenes were often the latter scenes after the fighting was over and the consequences had come. Robin Gray 11G Overall there are many versions of the play Romeo and Juliet but this is by far the best. William Shakespeare has an extraordinary talent as shows this in the writing of the play. ...read more.