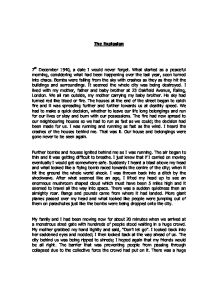 The Explosion 7th December 1940, a date I would never forget. What started as a peaceful morning, considering what had been happening over the last year, soon turned into chaos. Bombs were falling from the sky with crashes as they as they hit the buildings and surroundings. It seemed the whole city was being destroyed. I lived with my mother, father and baby brother at 23 Oakfield Avenue, Ealing, London. We all ran outside, my mother carrying my baby brother. He sky had turned red like blood or fire. The houses at the end of the street began to catch fire and it was spreading further and further towards us at deathly speed. We had to make a quick decision, whether to leave our life long belongings and run for our lives or stay and burn with our possessions. The fire had now spread to our neighbouring houses so we had to run as fast as we could; the decision had been made for us. I was running and running as fast as the wind. I heard the crashes of the houses behind me. That was it. Our house and belongings were gone never to be seen again. ...read more.

Did they notice? I don't think so. I was walking along dragging my feet along the road with my head down; my tears splashing onto the road like millions of crystals. After what seemed like an endless walk I reached a small village and there was a huge sigh of relief that passed throughout the crown but my torment was not over yet as I was still separated from my parents. All the villagers were out greeting the whole crowd. A young man aged around 25 shook my hand and said, "Where are your parents"? I didn't reply and began to walk away and as I did he asked me if I would like some food at his house and bed for the night and of course I accepted because I was very hungry and tired. It was a short walk from where we met and I was a beautiful traditional cottage, much nicer than my house in the city. It was cozy with a bright green front lawn and inside was just as attractive. The smell of freshly cooked beef stew passed throughout the cottage. My stomach was rumbling, like the rumble of an earthquake, as I was starving after my ordeal. ...read more.

The rumbling sound of a truck was right above us. There was a huge gasp from the people in the shelter then the silence returned. The rumbling noise seemed to have gone but then there was the noise of marching feet going from behind us and heading towards the front door. Again there was a silence which was followed by an almighty thump on the front door; again and again the door was hit. There must have been five or six blows before the door gave way. Everyone in the shelter took a glimpse through the shelter door to see German soldier's pouring through the door. Once we had seen that they knew where we were there was a sudden rush to get to the other side of the shelter. There was nowhere we could go. That was it; we where trapped. The clanging of peoples feet coming down the metal stairs getting closer and closer at astonishing speed. I was at the front of the group still holding my baby brother. I dropped to the floor, closed my eyes and held my brother as tight as I could. BANG! BANG! The door in front of me crashed to the floor. Soldiers came charging in, lifted their guns up, and pointed them towards us. "ROUS: ROUS: SCHNELL"! My search was over. ?? ?? ?? ?? ...read more.