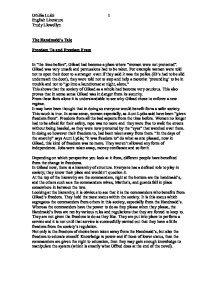 The Handmaid's Tale Freedom To and Freedom From

The Handmaid's Tale Freedom To and Freedom From In "the time before", Gilead had become a place where "women were not protected". Gilead was very unsafe and percussions had to be taken. For example women were told not to open their door to a stranger even if they said it was the police (ID's had to be slid underneath the door), they were told not to stop and help a motorist 'pretending' to be in trouble and not to "go into a laundromat at night, alone." This shows that the society of Gilead as a whole had become very cautious. This also proves that in some sense Gilead was in danger from its security. ...read more.

"In the days of the anarchy" says Aunt Lydia; "it was freedom to" do what as one pleased, now in Gilead, this kind of freedom was no more. They weren't allowed any form of independence. Jobs were taken away, money confiscate and so forth. Depending on which perspective you look at it from, different people have benefited from the change in freedoms. In Gilead now, there is a hierarchy of structure. Everyone has a defined role to play in society; they know their place and wouldn't question it. At the top of the hierarchy are the commanders, right at the bottom are the handmaid's, and the others such as a the commanders wives, Martha's, and guards fall in place somewhere in between the two. ...read more.

Knowledge is power and if those of lower status, than the commanders are given the right to education, then they may gain enough knowledge to manipulate the system (which is exactly what Offred does at the end of the novel). So although it can bee said that women in all have benefited from freedom from, this is not entirely true. There is no doubt to say that, yes they are now safe from the dangers of Gileads former ways (crime etc), but now they are restrained in many ways, more than one, that it is reasonable to suggest that their former way of living was more beneficial to women as a whole, because they had freedom and choice. 1 Othilia Luiki English Literature Trudy Llewellyn ...read more.