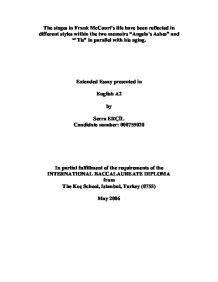 the language and the style of the author Frank McCourt within his two memoirs &quot;Angela's Ashes&quot; and &quot;'Tis&quot;.

as though he has forgotten to mention some important fact, and then proceeds to introduce his parents. Although he is now writing from his parents' point of view, the reader is quite aware that this is still McCourt's interpretation of their story. After briefly establishing both his mother and father's basic background, he begins his first story of the book. Frank McCourt wisely chooses the story of his parents first meeting, their marriage, and his birth, which all occur in a surprisingly short period of time. This first story allows the reader to get used to McCourt's style of writing and also places the reader into the lives and personalities of his parents. His language includes very little actual description, but he implies hundreds of little details that the reader can sense, but must continue to read to understand. Once McCourt is born, he shifts the perspective immediately to his point of view. He begins with his first memory as a little child, conveying his thoughts through simple, short sentences. As he progresses through his childhood, he uses grammar and vocabulary corresponding to his level of knowledge at his current age in the book. The diction used in each literary work is basic. Simple and compound sentences express Frank McCourt's life clearly, refraining from double meanings or hidden messages. Frank's unadulterated language describes his perceptions and the actions of those around him in Angela's Ashes; while he enters into his personal world of thoughts and dreams in 'Tis. Frank is contempted at throughout his life, but he only begins to describe how it makes him feel in his second work; he opens up as he matures in 'Tis, expressing his true feelings. "You'd think the professors would be standing in front of their classes telling them that if you go to the Biltmore Hotel front lobby you're not to be staring at people with red eyes... ...read more.

For the most part, the reader can differentiate narrative from conversations, but in some cases the reader can't tell one speaker from another or even Frank's thought from his speech. Because no quotation marks appear, no visual barriers separate the different speakers. The lack of punctuation marks also allows the reader to see a mental picture of several characters simultaneously. With quotation marks, speakers are so clearly set apart that only two mental pictures are possible. The effect of this is perhaps to remind the reader that everything in the memoir is being filtered through the consciousness of the child narrator. It is always Frank McCourt who is reporting the speech, whether direct or indirect. Throughout the book "Angela's Ashes" we see Frank McCourt clearly develop into a young adult from the start to finish. As Frank progresses into adolescence, he explores the feelings and changes he goes through. Such topics as sexuality, adolescence, religion, alcoholism and the outcomes are dealt with. While this part of the book is very humourous at times, it still strongly reinforces the point of a dysfunctional family and the effects it has on children. As Frank McCourt matures into this young man, his writing also "matures". The text, thoughts and the relationship with the reader certainly progresses and becomes more complex as Frank grows up. The examples taken from the ages of four, eleven and fourteen prove these obvious differences. Through a growing "innocent-eye" narrative technique McCourt is able to create an influential connection with the reader. Both "Angela's Ashes" and "'Tis" are brilliantly narrated, laugh-one-moment-and-cry-the-next kind of memoirs. Even when the story is sad, bitter and severe, the language of the narrator is as sweet as a really good children's tale. Always smooth, always flowing. The narrator is a child, he grows up with the story, but his suspecting, questioning, innocent language remains the same. Although one could read this book without having read Angela's Ashes, it would be preferable to read the earlier book first. One can then appreciate 'Tis more as a continuation of the story begun in the childhood memoirs. ...read more.