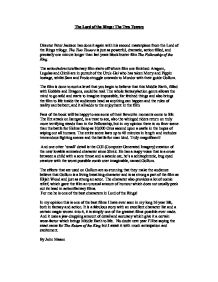 The Lord of the Rings: The Two Towers.

The Lord of the Rings: The Two Towers Director Peter Jackson has done it again with his second masterpiece from the Lord of the Rings trilogy. The Two Towers is just as powerful, dramatic, action filled, and precisely one minute longer than last years block buster film The Fellowship of the Ring. The action/adventure/fantasy film starts off where film one finished: Aragorn, Legolas and Gimli are in pursuit of the Uruk-Hai who has taken Merry and Pippin hostage, whilst Sam and Frodo struggle onwards to Mordor with their guide Gollum. The film is done to such a level that you begin to believe that this Middle Earth, filled with Hobbits and Dragons, could be real. ...read more.

also the whinged riders return on truly more terrifying steeds than in the Fellowship, but in my opinion there is no finer scene than the battle for Helms Deep as 10,000 Orcs ascend upon a castle in the hopes of wiping out all humans. The entire scene lasts up to 40 minutes in length and includes tremendous fighting scenes and the battle for man kind. Truly magnificent! And one other 'small' detail is the CGI (Computer Generated Imagery) creation of the new lovable animated character since Shrek. He has a raspy voice that is a cross between a child with a sore throat and a satanic cat, he's a schizophrenic, bug eyed creature with the worst possible comb over imaginable, named Gollum. ...read more.

For me he is one of the best characters in Lord of the Rings! In my opinion this is one of the best films I have ever seen in my long 16 year life, both in fantasy and action. It is a fabulous story with an excellent character list and a certain magic woven into it, it is simply one of the greatest films possible ever made. And it uses a jaw-dropping amount of detail and accuracy which give it a certain wow-factor which brings Middle Earth to life. No doubt next year I'll be saying the exact same for The Return of the King but I await it with much anticipation and excitement. By John Mason ...read more.