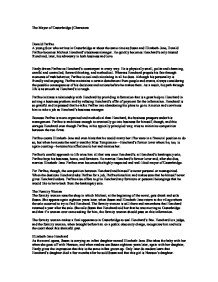 The Mayor of Casterbridge | Characters

The Mayor of Casterbridge | Characters Donald Farfrae A young Scot who arrives in Casterbridge at about the same time as Susan and Elizabeth-Jane, Donald Farfrae becomes Michael Henchard's business manager. He quickly becomes Henchard's only trusted friend and, later, his adversary in both business and love. Hardy draws Farfrae as Henchard's counterpart in every way. He is physically small, polite and charming, careful and controlled, forward thinking, and methodical. Whereas Henchard propels his fate through moments of rash behavior, Farfrae is cool and calculating in all he does. Although his personality is friendly and engaging, Farfrae maintains a certain detachment from people and events, always considering the possible consequences of his decisions and actions before he makes them. As a result, his path through life is as smooth as Henchard's is rough. Farfrae initiates a relationship with Henchard by providing information that is a great help to Henchard in solving a business problem and by refusing Henchard's offer of payment for the information. Henchard is so grateful and impressed that he talks Farfrae into abandoning his plans to go to America and convinces him to take a job as Henchard's business manager. ...read more.

Yet he sometimes says things that are rash and even cruel and then follows through on them just as if they were contracts made in good faith. Such an outburst causes him to sell his wife at the beginning of the novel. Henchard has the willpower and determination to keep an oath for twenty-one years, yet he seems to rarely think ahead, and, in a single moment of ire, he can do a deed that ruins years of effort. He is so honest that when the furmity woman exposes his past, he readily admits that she is telling the truth, and when he declares bankruptcy, he willingly turns over everything but the clothes on his back to his creditors. Yet when Newson comes looking for Elizabeth-Jane, Henchard tells him she is dead. Henchard begins the novel a young man who is poor but who at least possesses a skill, the vigor of youth, and a wife and child. Yet he is convinced that his early marriage has ruined his chances in life. After shamefully ridding himself of the wife and child, he forswears the alcohol that undoubtedly fueled the deed and almost completely forswears the company of women, channeling all his energies into his business. ...read more.

Newson's basic decency is seen later in his desire to share his wealth with Elizabeth-Jane, in his acceptance of Henchard's word that she has died, and in his lack of bitterness when he discovers that Henchard has lied to him. At the end of the novel, Newson lives within sight of the sea but also near his daughter. Lucetta Templeman Lucetta Templeman is a superficial, unthinking woman who, like Henchard, suffers several reversals of fortune and ends badly. Henchard has an affair with her before Susan arrives in Casterbridge, and this affair ruins Lucetta's reputation. To try to repair the damage, Henchard, thinking that Susan is probably dead, offers to marry Lucetta. Before the marriage takes place, though, Susan returns, and Henchard must call off the wedding. After Susan dies, Lucetta inherits wealth, and Henchard renews his interest in her. Lucetta is more interested in Farfrae, though, and marries him. When Lucetta's old letters to Henchard become public, the scandal of their affair returns to haunt them both, and Lucetta is so distraught by this that she suffers a seizure and dies. Farfrae soon realizes that Lucetta was not a good match for him and that, had she lived, their marriage would not have been happy. Themes ...read more.