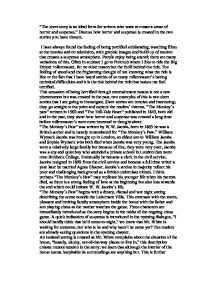 "The short story is an ideal form for writers who want to create a sense of horror and suspense." Discuss how horror and suspense is created in the two stories you have chosen. I have always found the feeling of being petrified exhilarating, watching films at the movies and on television, with graphic images and build up of tension that creates a suspense atmosphere. People enjoy being scared; there are many variations of this. Often in summer I go to Portrush where I like to ride the Big Dipper rollercoaster, for no other reason but the thrill behind the ride. The feeling of speed and the frightening thought of not knowing what the ride is like or the fact that I have heard stories of so many rollercoaster's having technical difficulties and it is the risk behind the ride that makes me feel terrified. This sensation of being horrified through entertainment means is not a new phenomenon but was created in the past, two examples of this is two short stories that I am going to investigate. Short stories are concise and interesting; they go straight to the point and capture the readers' interest. "The Monkey's paw" written in 1902 and "The Tell-Tale Heart" published in 1843, both old and in the past, they show how horror and suspense was created a long time before rollercoaster's were even invented or thought about. "The Monkey's Paw" was written by W.W. Jacobs, born in 1863 he was a British author and is mostly remembered for "The Monkey's Paw." William Wymark Jacobs was brought up in London, an eldest son to William Jacobs and Sophia Wymark who both died when Jacobs was very young. The Jacobs were a relatively large family but because of this, they were very poor, Jacobs was a shy and quiet boy who attended a private school in London then went onto Birkbeck College. ...read more.

In the third and final chapter of the short story, it creates the utmost tension, horror, and suspense. As we find out that the mother wants to use one of two wishes to bring her son back to life we are appalled but in wonder of what will happen, the image of a mangled body is in our minds. As the dialogue fastens in story we hear her desire and panting for the wish to be wished for. Though in contrast the old man stammers and is beside himself with revolt as he imagines his son alive in a distorted body. This image is not described in the story but we can imagine what the son would look like as he was "caught in the machinery". There is another anti-climax when the old man finally wishes for his son to be alive again, the readers wonder in astonishment if the son will come back in his garbled body or if indeed the first wish occurred by coincidence. We think this is the case as there is no suggestion the son is coming back and both parents go to bed, but we are greeted with the almost unearthly knocking at the door, this creates the propelling suspense and the overwhelming horror as the mother scurries to the door in a fluster as she can't open the door, whilst the father is on his hands and knees groping wildly for the monkey's paw. The climax comes to a spell bounding end as the father finds the monkey's paw before the door is completely opened and the final wish is used to get rid of whatever the thing was that knocked at the door. The story ends in wonder as the suspense and horror is fulfilled in a surprising and shocking ending that is similar to W.W. Jacob's style of writing. "The Tell-Tale Heart" was written by Edgar Allan Poe who was born on 1809 in Massachusetts the son of actors Elizabeth Hopkins and David Poe. ...read more.

The monologue story written in the past tense ends in the admission of the crazed narrator, this type of story is of the horror genre, and it is a good example of the work of Edgar, who specifically concentrated on mental ways in which he could captivate his audience through suspense and horror. I think in contrast that both these two short stories "The Monkey's Paw" and "A Tell-Tale Heart" are extremely alike in many ways, both trying to captivate their readers by providing them with snippets of spine-chilling horror and suspense. "The Monkey's Paw" is more centered on the idea of fate and how much it can control people's lives, whilst "The Tell-Tale Heart" is about insanity of the mind and the deep and vivid descriptions about the planning of the murder. "The Monkey's Paw" is a lot longer with three separate chapters whereas "A Tell-Tale heart" is just a few pages long, but both these stories are enchanting and detain the readers' interest throughout with horror and suspense. "The Monkey's Paw" has an oriental feel about the style of writing and the object of the paw, this is more of an Indian style, whereas in "A Tell-Tale Heart" there is just a feeling of craziness, with a slight American influence in the style of writing. In my opinion both stories end in mourning, in "The Monkey's Paw" it is the loss of the son and the parents' grieve that we can feel a particular sadness, where as in "A Tell-Tale Heart" it is the death of the old innocent man, with maybe a slight cancellation of his body being found and his murderer having been found with no trouble. Overall I think both stories effectively interest readers with compelling descriptions in both stories that create heightened anxiety, creeping suspense with many climaxes and certainly a magnitude of horror. Both stories I thoroughly enjoyed and with the same exhilaration as going on a rollercoaster. ...read more.