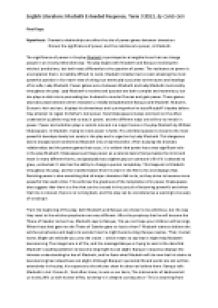 The Significance of Power in Macbeth

﻿English Literature: Macbeth Extended Response, Term 3 2012, By Caleb Goh Final Copy Hypothesis: Dramatic relationships are often the site of power games between characters. Discuss the significance of power, and the resistance to power, in Macbeth. The significance of power in the play Macbeth is portrayed as a tangible force that can change people in an incomprehensible way. The play begins with Macbeth and Banquo receiving the witches? predictions, but both react differently to the question of power. The resistance to power is a temptation that is incredibly difficult to resist. Macbeth initially tries to resist attaining the most powerful position in his reach- that of a king, but eventually succumbs to the taunts and leadings of his wife, Lady Macbeth. Power games occur between Macbeth and Lady Macbeth most vividly throughout the play. Lady Macbeth?s motives and purpose are both complex and mysterious, but she plays a vital role in persuading her husband to murder Duncan and gain power. These games also take place between other characters, initially being between Banquo and Macbeth. Malcolm, Duncan?s heir and son, displays his shrewdness and cunning when he tests Macduff?s loyalty before they attempt to regain his father?s lost power. Here Shakespeare makes comment on the often unattractive qualities required to stay in power, and the different ways one will try to remain in power. ...read more.

She is ambitious for herself and for her husband. As a result, she decides to ?sacrifice her own humanity? in order to the both of them get the crowns. She does this by literally calling on evil spirits and unsex her. The word represents removing her womanhood. She wants to rid of any kindness and tenderness that is generally related to womanhood. In a startling, graphic verse that continues for seventeen lines, this bold act certainly seems to have taken away her womanhood. She declares in the final lines of the Act I Scene V to, ?Leave the rest to me.?, indicating that she will murder Duncan. She says this after reading Macbeth?s face of fear and realising that she has convinced him to murder Duncan. It is ironic that although Lady Macbeth considers herself to be strong and Macbeth to be weak, it differs to the true state of affairs. Lady Macbeth ultimately collapses and dies in a mysterious way because of the stress of her evil deeds, while Macbeth has been hardened by the things he has done and possesses the strength to carry on. When Macbeth slays Duncan and Lady Macbeth kills the two servants and frames them, it is a terrible act that signifies the point of no return. The natural order seems to be overturned, as darkness covers the land after the act. ...read more.

It seems that for Macduff, the only way to satisfy himself is to regain power and avenge the death of his family by killing Macbeth personally. This shows snippets of the way power shaped the way Macbeth behaved and Macduff?s resistance to power and his self-control can be questioned. It is interesting to note that Malcolm and Macduff do not resist regaining power as it is rightfully Malcolm?s. In some ways then, their purpose of attaining power is justified. It remains to be seen, however, the type of king Malcolm will eventually become, and the type of subject Macduff will be to Malcolm, considering the prediction of Banquo?s children becoming kings. In conclusion, it is apparent that dramatic relationships are the sight of many power games, and the significance of power and the resistance to power can be studied by investigating the relationships between the several complex characters in the play, Macbeth. Power is a natural desire, everyone wants to become more powerful or more relevant in today?s context get a higher position because of the influence and benefits that are available. It is important also though, to heed the warning that Shakespeare conveys through Macbeth. Unbridled power has devastating transformational power that becomes harder to resist the deeper you find yourself affected by it. It is vital to be attentive to the line that determines a perplexing reality: once you cross it, there is no turning back. ...read more.