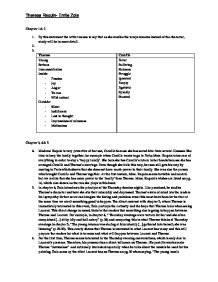 Chapter 1 & 2 1. By this statement the writer means to say that as she studies the temperaments instead of the character, study will be in more detail. 2. 3. Therese Camille Young Serious Iron constitution Inside: - Passion - Joy - Anger - To run - Wild animal Outside: - Silent - Indifferent - Lost in thought - Impressions of calmness - Motionless Fever Suffering Sickness Struggle Ignorant Empty Egotistic Spindly Stunted Chapter 3, 4 & 5 4. Madame Raquin is very protective of her son, Camille because she has saved him from several illnesses. She tries to keep the family together, for example when Camille wants to go to Paris; Mme. Raquin takes care of everything in order to stay a 'happy family'. She feels she has Camille's future in her hands because she has arranged Camille and Therese's marriage. Even though she feels this way, her son still gets his way by moving to Paris which shows that she does not have much power in their family. She was also the person who brought Camille and Therese together. At the first instant, Mme. Raquin seems invisible and neutral but we realize that she has more power in the 'family' than Therese. Mme. Raquin's wishes are listed on pg. 16, which also shows us the role she plays in this book. 5. In chapter 4, Zola introduces the principle of the Thursday domino nights. Like promised, he studies Therese's character and how she sits their miserably and depressed. Therese's state of mind lets the readers feel sympathy for her as we can imagine the boring and pointless event this must have been for her but at the same time we await something good to happen. ...read more.

If I were filming the murder of Laurent I would focus on Therese's facial expressions since that is the main image Zola is trying to portray in my point of view. "It was the oarsmen who ate Camille's dinner". Even though this is a very simple and straight forward phrase, Zola emphasizes it by not only separating it from the body paragraph but also by the length and the fact that it is at the end of the chapter where Camille's murdered. This shows the readers the unimportance of Camille's disappearance in their lives, which doesn't seem that important because it is portrayed in a more humorous way than serious. Chapter 12, 13 & 14 12. Laurent is na�ve to assume he could forget the murder because seen his personality that Zola described in the beginning of the book, he seems lazy and calm and who never have considered murdering a friend of his before he met Therese. We cannot forget that Laurent is very manipulative, for example, he managed to have and affair with Therese. Therefore, this whole situation was well thought out however, murdering a friend cannot be easily forgotten, as seen in his dreams later on in the book. 13. Camille's fellow workers at Orleans Railway seem happy that they can finally talk about one of their fellow drowned worker. At the same time, this shows that Camille doesn't have true friends at the Orleans Railway because otherwise they wouldn't be proud of his death. The people in Paris, rich or poor, like the spectacle of the Morgue and find it enjoyable to see the dead people lying down on the slaps visible to the crowd. ...read more.

On the other hand, the scar reminds the couple of Camille and how they murdered a friend in order to be together. 21. In this book, we are not sure when the truth has been said. However one of the moments when the truth has been said is when Laurent and Therese talk about their crime right in front of Mme. Raquin. Most of the time the conversations between Therese and Laurent after their marriage are very honest and truthful, at least that is the sense Zola portrays when talking about these two characters. The fact that the both Laurent and Therese lay their roles when in the presence of others justifies that when they are alone together, the narrator tells the readers the truth but there is no way to be certain. Chapter 30, 31 & 32 22. Laurent and Therese realize that they have just murdered their friend in order to get married and be together. Even though Therese and Laurent would dispute, the crime they committed together bound them together but also separated them on a sentimental level. In addition, the mutual destruction is exaggerated in such a way that the readers do not feel that this is realistic. 23. Themes Scenes Passion (between Laurent and Therese) Anger (in the eyes of Mme. Raquin) Guilt (in Therese's and Laurent's point of view) Violence (the crime, the morgue, verbal violence between Laurent and Therese) 24. Portrait- foreshadows Camille's death and the crime the two characters will commit Color Green- illustrates the color of a drowned man: Camille Scar- symbolizes Laurent's conscience Cat- symbolizes Mme. Raquin because she is quite and lost in thoughts like the old woman. Camille's ghost- symbolizes the constant presence of Camille and the constant reminder of their crime ?? ?? ?? ?? Therese Raquin- Emile Zola ...read more.