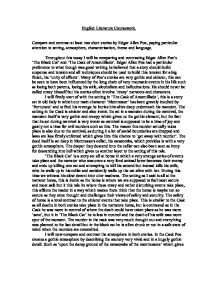 Throughout this essay I will be comparing and contrasting Edgar Allen Poe's 'The Black Cat' and 'The Cask of Amontillado'.

English Literature Coursework. Compare and contrast at least two short stories by Edgar Allen Poe, paying particular attention to setting, atmosphere, characterisation, theme and language. Throughout this essay I will be comparing and contrasting Edgar Allen Poe's 'The Black Cat' and 'The Cask of Amontillado'. Edgar Allen Poe had a particular preference to what though was good writing he believed that a story should build suspense and tension and all techniques should be used to build this tension for a big finish, his 'unity of effects'. Many of Poe's stories are very gothic and sinister, this can be seen to have been influenced by the long chain of very traumatic events in his life such as losing both parents, losing his wife, alcoholism and hallucinations. He should never be called crazy himself but his stories often involve 'crazy' narrators and characters. I will firstly start of with the setting in 'The Cask of Amontillado', this is a story set in old Italy in which our main character 'Montressor' has been gravely insulted by 'Fortunato' and to find his revenge he buries him alive deep underneath his mansion. The setting in the Cask is sinister and also ironic. Its set in a mansion during the carnival, the mansion itself is very gothic and creepy which gives us the gothic element, but the fact that its set during carnival is very ironic as carnival is supposed to be a time of joy and gaiety not a time for evil murders such as this. ...read more.

I'd say the character is actually rather reliable as he doesn't seem to be 'insane', just getting revenge the only way he thinks he can, and he often mentions that what he's doing is just part of human nature and everyone does it just maybe not on this scale. His state of mind is pretty secure, he seems to know exactly what he's doing and just how he's going to do it and everything seems very much planned out to the utter last detail. His only slip would seem to be right at the end when he starts to call out Fortunato's name where it would seem that he's starting to feel regret already for what he's doing. He's very manipulative as he knows exactly what things to say to make Fortunato come with him, such as mentioning 'Luchresi' as he knows that Fortunato would be in competition with him and would be jealous to see him take it to Luchresi instead of him, he basically uses him as a lure, even though that is all we hear about Luchresi its enough to sway Fortunato into the montressors deep vaults. Now for the narrator in the black cat, at the beginning of the story he is made out to be a very respectful and animal loving character. In the case of this particular character I can easily say that he is unreliable as he is clearly insane. Unlike the narrator in the cask, during his mental disintegration he starts to hallucinate. ...read more.

This particular rhetorical question is basically talking about this perverse side in everyone and about basic human nature, which is something that we can all relate to as readers and could also, be the narrator trying to justify his actions as part of everyday human nature. Poe's vocabulary is very vicious, emotive and demonic, such as 'demons', 'exhault', 'damned' and 'agony'. These emotive words play on the emotions and are much better than just normal descriptive words. Once again, like the Cask, intensity is created and built throughout the story, and both have foreshadowing, symbolism and good diction. An example of foreshadowing in the black cat could be the narrator's hallucination of the gallows appearing in his second cat's fur, this could be foreshadowing a death that he could be related to including himself. The last category I will be comparing and contrasting is themes in the tale. In the cask Poe explores several themes, such as the dropping of moral boundaries at the time of carnivals and their consequences, such as crime. Poe is just using this extremity to show this. Revenge is also another theme explored in this tale and once again this is an extremity to show that. It is also to explore the narrator's state of mind and to entertain the reader. In the black cat Poe explores the idea that everyone has a perverse side and uses this extremity to show that. Like the cask, it also explores the narrator's state of mind and to entertain the reader. ...read more.