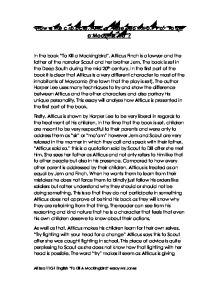 To Kill a Mockingbird Essay

How is the character Atticus presented in Part 1 of "To kill a Mockingbird"? In the book "To Kill a Mockingbird", Atticus Finch is a lawyer and the father of the narrator Scout and her brother Jem. The book is set in the Deep South during the mid 20th century. In the first part of the book it is clear that Atticus is a very different character to most of the inhabitants of Maycomb (the town that the play is set). The author Harper Lee uses many techniques to try and show the difference between Atticus and the other characters and also portray his unique personality. This essay will analyse how Atticus is presented in the first part of the book. Firstly, Atticus is shown by Harper Lee to be very liberal in regards to the treatment of his children. In the time that the book is set, children are meant to be very respectful to their parents and were only to address them as "sir" or "ma'am" however Jem and Scout are very relaxed in the manner in which they call and speak with their father. "Atticus said so," this is a quotation said by Scout to Dill after she met him. She sees her father as Atticus and not only refers to him like that to other people but also in his presence. Compared to how every other parent is addressed by their children, Atticus is treated as an equal by Jem and Finch. ...read more.

Moreover, Atticus is presented to be very modest. Jem starts to become quite embarrassed when all the other fathers in the school take part in very active jobs and Atticus just works in an office. However, when the rabid dog has to be shot he shoots it straight through the forehead. "I think maybe he put his gun down when he realized that God had given him an unfair advantage over most living things." This quotation shows how down-to-earth Atticus is because he could have easily carried on shooting as a hobby to impress people as he was really good at it; however he stopped shooting because he thought that his talent had come with a responsibility. The words "unfair advantage" show how he views not only all humans as equal but also he has great respect for other creatures. Shooting is a huge hobby in America and being good at it would give someone huge prestige instead of insisting that he is better than people, he almost sees his talent as something that he should not exploit and he should restrict his usage as it would not be fair on other people and other animals. This shows the reader that Atticus has great humility as he was under pressure by his son to be more active yet still hid his talent from as well as he could, what's more, animal rights was not prominent in the deep south (some humans hadn't been bestowed their basic rights!) ...read more.

Furthermore, Atticus seems to do most things in an individual way. He brings up his children by himself and never hits them but only ever threatens; he never tells what Scout to wear and lets them call him by his first name. Atticus Finch is a character that is deeply proud of his Maycomb heritage but cannot be likened to anyone else in the county. He constantly defies the general consensus of the county by defending black people, giving a lot of freedom to his children and dropping a popular hobby in which he was very good. Finally, Atticus has a laissez-faire view on some things that are strongly regulated in some Maycomb children's life. He indirectly teaches his daughter to read by letting her sit on his lap whilst he read newspapers every night and he does not mind what she wears. If you compare these things to modern time they do not sound extraordinary; letting girls wear what they want was a by-product of second-wave feminism and the American education system is much less curriculum based and a bit more free. Atticus was doing these things decades before they became the norm which shows how innovatory he is. To conclude, one thing that can be easily noticed in the first part of the book is that Atticus Finch seems like a fish out of water in Maycomb and it can be argued that it is because he is too good for it. ?? ?? ?? ?? Ali Issa 11G1 English "To Kill A Mockingbird" essay Ms Jones ...read more.

The response to the question was done excellently, with many points given, along with evidence and explanations. The essay has an excellent structure, following the basic Point Evidence Explain rule well, which is something taught at GCSE and should be ...

The response to the question was done excellently, with many points given, along with evidence and explanations. The essay has an excellent structure, following the basic Point Evidence Explain rule well, which is something taught at GCSE and should be used in essays like these- the student does this well. The introduction to this essay is also excellent, as it is not long-winded like many introductions can be, rather it is concise and gives the necessary information. I also found the essay consistent and the response conceptualised, with the fact that Atticus is portrayed as a "different" character in the book backed up with many points and evidence which then makes the essay flow.

I found the analysis done pretty well, with words picked out and also analysed- something that is essential for high marks. The analysis also included social and historical context, which was great as not only was the test analysed, it was also related to the time the book was written, which gives deeper meanings to the quotes and also backs up points. One improvement would be that the quotes were embedded, as although single words are, the full quotes are not as such which is something that could lose marks.

The quality of writing is great, with spelling and punctuation done correctly. Sentence structure overall was done well, with the exception of a couple of sentences that did not make sense. Otherwise, no other issues there.