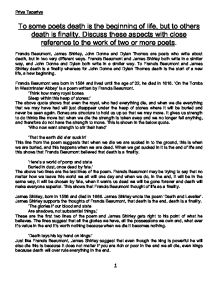 To some poets death is the beginning of life, but to others death is finality. Discuss these aspects with close reference to the work of two or more poets.

Priya Tapariya To some poets death is the beginning of life, but to others death is finality. Discuss these aspects with close reference to the work of two or more poets. Francis Beaumont, James Shirley, John Donne and Dylan Thomas are poets who write about death, but in two very different ways. Francis Beaumont and James Shirley both write in a similar way, and John Donne and Dylan both write in a similar way. To Francis Beaumont and James Shirley death is a finality whereas for John Donne and Dylan Thomas death is the start of a new life, a new beginning. Francis Beaumont was born in 1584 and lived until the age of 32, he died in 1616. 'On the Tombs in Westminster Abbey' is a poem written by Francis Beaumont. 'Think how many royal bones Sleep within this heap of stones:' The above quote shows that even the royal, who had everything die, and when we die everything that we may have had will just disappear under the heap of stones where it will be buried and never be seen again. Bones are structure to hold us up so that we may move. It gives us strength to do thinks like move but when we die the strength is taken away and we no longer fell anything, and therefore do not have the strength to move. ...read more.

line of the poem and it suggest that John Donne thought that death is nothing to be proud of even if some may say it is, for example Francis Beaumont and James Shirley who both believe that death is a finality. 'Die not, poor death; nor yet canst thou kill me' This may suggest that John Donne thought that death will not be able to get him and therefore he would die but he would have an after life or go to heaven and death would not be able to bet him. This may also suggest that John Donne believed in God and that God would not allow his soul to die. 'Rest of their bones and soul's delivery!' This may suggest that he will die but his soul will not, his soul will carry on and it will be beginning of a new life but in a different form, or we will go to heaven. 'Thou'rt slave to fate, chance, kings, and desperate men,' This line may suggest that fate is a slave to the higher cast; the kings, and that because kings are high-powered death will not have the authority to kill and that death is a slave to kings. ...read more.

John Donne believes that the rich and high casted can over rule death and Dylan Thomas believes that no matter how rich or poor you are death will not win. John Donne was a priest and therefore because he followed God and was most likely to be religious he believed that there is a heaven and God. In conclusion I believe that that all four poets have there own way of writing about weather they believe that death is a finality or the beginning of a new life. The poets may have their reasons for believing in what they did and perhaps this is the way they thought of life the beginning or the end. I disagree with both James Shirley and Francis Beaumont as I believe that death is not a finality and that we can have an after life. I agree with Dylan Thomas as I believe that no matter how high or low our cast we will die and become the same and it is up to the soul to carry on and make the next person a better person, and this means that I disagree with the fact that if you are lower casted you will not go to heaven because I believe that you can improve in your next life and that is the reason for the next life; so you can improve on the mistakes you made in the previous life. 3 ...read more.