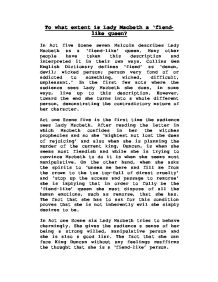 To what extent is Lady Macbeth a 'fiend-like queen?

To what extent is Lady Macbeth a 'fiend-like queen? In Act five Scene seven Malcolm describes Lady Macbeth as a 'fiend-like' queen. Many other people have taken this description and interpreted it in their own ways. Collins Gem English Dictionary defines 'fiend' as 'demon, devil; wicked person; person very fond of or addicted to something, wicked, difficult, unpleasant.' In the first few acts where the audience sees Lady Macbeth she does, in some ways, live up to this description. However, toward the end she turns into a whole different person, demonstrating the contradictory nature of her character. Act one Scene five is the first time the audience sees Lady Macbeth. After reading the letter in which Macbeth confides in her the witches prophecies and so she 'mightest not lost the dues of rejoicing' and also when she is planning the murder of the current king, Duncan, is when she seems most fiendish and while she is trying to convince Macbeth to do it is when she seems most manipulative. On the other hand, when she asks the spirits to 'unsex me here and fill me from the crown to the toe top-full of direst cruelty' and 'stop up the access and passage to remorse' she is implying that in order to fully be the 'fiend-like' queen she must dispose of all the human emotions, such as remorse, that she has. ...read more.

The events in this scene can be described as both fiendish, where she is lying to remove suspicion from her husband and herself, and not fiendish, where she may be fainting because of conscience. Lady Macbeth only appears once in Act three Scene one but it is still quite important to her changing character. The only time Lady Macbeth appears in this scene is to say about Banquo 'if he had been forgotten, it had been as a gap in out great feast, and all-thing becoming' which implies that they want him at their feast but Lady Macbeth does not know that Banquo knows what the witches prophesised about Macbeth, that he would become king, nor does she know that they prophesised that his sons would be kings also. The only other important aspect of this scene is the way Macbeth hires the murderers to kill Banquo. He does this without telling Lady Macbeth and so this scene is important in the sense that it shows the changing balance of power in their relationship. Ho no longer needs her to give him a push in the right direction each time they need to do anything, and is even now doing things that are not really necessary quite independently. ...read more.

The entire scene shows a non-fiendish aspect of Lady Macbeth's character because no one who is mad can be truly fiendish. The final scene where Lady Macbeth is mentioned is Act five Scene five where Macbeth hears of Lady Macbeth's suicide. His apparent lack of remorse - 'she should have died hereafter' shows a fiendish, uncaring quality I him aswell as all the qualities in her. He is no longer the passionate partner from the beginning of the play. The fact that she committed suicide makes her even less a fiend because it was done out of remorse, guilt, or both. In conclusion, I think that Lady Macbeth is not a fiendish character. She has many aspects which are far from nice, and she strives to be a fiend, but these are countered by all the aspects of her personality that are not fiendish. She is positively evil at the beginning but, as the play wears on, she become more and more human until the audience can almost believe that all her actions up until she goes mad were all for Macbeth's benefit, so that he would have the power and a good life instead of being for her benefit so that she would have a good life. That is merely my opinion, but I feel that it is an accurate on given all the evidence in the play. ...read more.