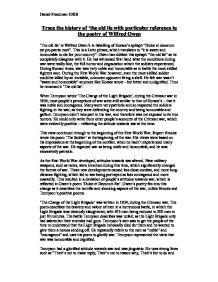 Trace the history of 'the old lie with particular reference to the poetry of Wilfred Owen 'The old lie' is Wilfred Owen's re-labelling of Horace's epitaph "Dulce et decorum est pro patria mori". This is a Latin phrase, which translates to "it is sweet and honourable to die for your country". Owen has dubbed this epitaph "the old lie" as he completely disagrees with it. He has witnessed first hand what the conditions during war were really like, the full horror and degradation which the soldiers experienced. During Roman times, war was very noble and honourable as in battle the most skilled fighters won. During the First World War however, even the most skilled soldier could be killed by an invisible, unknown opponent firing a shell. He felt war wasn't "sweet and honourable" anymore like Horace wrote - but bitter and undignified. Thus he renamed it 'The old lie'. When Tennyson wrote 'The Charge of the Light Brigade', during the Crimean war in 1854, most people's perceptions of war were still similar to that of Horace's - that it was noble and courageous. Many were very patriotic and so respected the soldiers fighting in the war, as they were defending the country and being honourable and gallant. Tennyson didn't take part in the war, and therefore was not exposed to its true horrors. He could only write from other people's accounts of the Crimean war, which were evidently positive - reflecting the attitude towards war at the time. This view continued through to the beginning of the First World War. Rupert Brooke wrote his poem 'The Soldier' at the beginning of the war. His views were based on his impressions at the beginning of the conflict, when he hadn't experienced many aspects of the war. He regarded war as being noble and honourable, and he was excessively patriotic. As the First World War developed, attitudes towards war altered. ...read more.

Owen's poem 'Anthem for doomed Youth', which he wrote during the war, significantly contrasts Brooke's 'The Soldier'. They both essentially deal with the same theme - that of honouring the dead, just as Tennyson said "Their glory will not fade", but they do so in opposite ways. Whereas Brooke describes how the soldiers gallantly died for their country, Owen describes how they were mercilessly killed and weren't given the sufficient gratitude they deserved. The fact that Owen's poem was written just a few years after Brooke's illustrates how drastically and rapidly the attitude to war altered. Again both poems contrast each other by writing in sonnet form for opposite purposes. Brooke's purpose is to create a peaceful mood, whereas Owen uses it to be sarcastic to show that no songs are being sung in memory of the soldiers at their funerals. "Shrill" and "demented" create a very depressing mood and the poem shows that the men lost their dignity as they were dying. It also describes the psychological effect on the surviving soldiers, who have to continue shooting while their friends die around them. The main purpose of 'Anthem for Doomed Youth' is to describe how the brave soldiers did not get a proper funeral. Throughout the poem, comparisons are made to the conditions of the soldiers passing into heaven and how most people would have a funeral. Owen makes absurd comparisons between the conditions of the war and of a funeral. He mentions how the gunfire will be their prayers, the paleness of their wives faces will be their pall, and their choir will be the sound of shells and their drawing-down of blinds will be sunset. He wants to get across that these people died for us and our country, but we have given no thanks. The poem contains lots of religious references, such as "orisons" and "choirs", making the title very significant. ...read more.

It draws the reader into the poem, and removes the reader's safe and stable surroundings and replaces them with fear. "You too could pace behind the wagon" makes the readers picture themselves walking behind a cart, with a gasping and suffocating soldier and bombs exploding all around. It alters the reader's sense of security and makes them feel unsafe. It is extremely effective as it portrays the psychological damage the soldiers must have experienced during the war, and putting yourself in that place helps you understand this. A very effective metaphor is used in the second stanza "As under a green sea, I saw him drowning". This constructs the image of a man choking in the smoke-filled air, as if under water. This again challenges the reader's sense of security as humans live in open air and wouldn't expect to be able to "drown" in their own domain. The metaphors and similes in the third stanza add a new dimension to the poem. This greatly affects the reader, as the soldiers fighting for the reader's country are now corrupt and evil. This is used to show that even though other poets may portray the soldiers as noble and courageous, death in war is still bitter and sickening - no matter how brave the soldier is; their deaths are still haunting. Owen using dramatic and sickening verbs, such as "writhing" and "gargling", to evoke the reader's sense of fear. After building up this incredibly powerful image of death and destruction Owen then finishes by explaining what 'the old lie' is and, after the sickening descriptions previously, it is very convincing. He says that when children ask for glorious stories of war, they would not be told what truly happened - they would be lied to. This is another reason why Owen renamed it 'the old lie'. The soldiers had to experience much harsher situations in the First World War than in the Crimean war, so outlooks towards it changed and war became regarded as less "sweet and honourable" but bitter and undignified. Daniel Freedman 10KB ...read more.