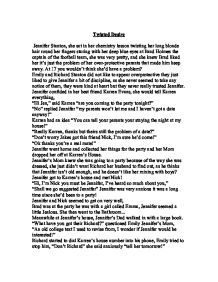 Twisted Desire Jennifer Stanton, she sat in her chemistry lesson twisting her long blonde hair round her fingers staring with her deep blue eyes at Brad Holmes the captain of the football team, she was very pretty, and she knew Brad liked her it's just the problem of her over-protective parents that made him keep away. At 17 you wouldn't think she'd have a problem? Emily and Richard Stanton did not like to appear overprotective they just liked to give Jennifer a bit of discipline, as she never seemed to take any notice of them, they were kind at heart but they never really trusted Jennifer. Jennifer confided in her best friend Karren Evans, she would tell Karren everything, "Hi Jen," said Karren "are you coming to the party tonight?" "No" replied Jennifer "my parents won't let me and I haven't got a date anyway!" Karren had an idea "You can tell your parents your staying the night at my house!" "Really Karren, thanks but theirs still the problem of a date?" "Don't worry Jakes got this friend Nick, I'm sure he'd come!" "Ok thanks you're a real mate!" Jennifer went home and collected her things for the party and her Mom dropped her off at Karren's House. Jennifer's Mom knew she was going to a party because of the way she was dressed, she just didn't want Richard her husband to find out, as he thinks that Jennifer isn't old enough, and he doesn't like her mixing with boys? ...read more.

Whilst this was going on Richard had been called away from his holiday as there was an urgent meeting that he and his wife needed to attend to, but Jennifer didn't know they were back in town. Jennifer's parents were now parking in the driveway but she didn't know. Jennifer and Nick were kissing in her parents bedroom, her father began to walk upstairs, he thought Jennifer had gone to sleep so he went to his room to put his case in, Jennifer saw the door open, "Oh no my dad" she yelled "RUN" Nick grabbed his Bag and started to run down the stairs, he ran so fast he knocked Emily down the stairs as she was coming to see what the commotion was about. "WHAT THE h**l DO YOU THINK YOU WERE DOING" Shouted Richard he was so angry that Jennifer had betrayed his trust. Jennifer stared to explain her self "But, but.." "..No buts, from now on your Mom takes you to and from school you stay in at night and do you homework, and you don't see HIM again!" Richard had really laid the rules down this time. Jennifer looked at her Mom "But Mom" she groaned. Her Mom just looked away. She went up to her room. Jennifer hated her parents; they had humiliated her once again. Jennifer laid on her bed, she didn't know what to do. ...read more.

Nick dropped the gun. He froze. Jennifer Picked up the gun, She didn't point it at her parents she pointed it at Nick "Are you Mad," he asked Jennifer replied, "Yes" She pulled the trigger of the gun but she turned to face her parents 'BANG' 'BANG' 'BANG' 'BANG' She turned back to Nick, "Jennifer there's another bullet?" said Nick curiously She sarcastically replied, "I know" 'BANG' Straight in Nicks forehead, he went flying backwards, the sick thing was Jennifer was smiling. She wiped the gun clean and placed it in Nick's hand so it would look like he murdered her parents and then shot himself. She walked over to her Mom, kissed her on the cheek and said "Famous last words always catch you out!" She spat on nick as she passed him. Jennifer returned to the sleep over and no-body knew she had gone! In the morning the Police were at Karen's house they told Jennifer what she already knew, and how they had secure evidence that Nick Ryan was to blame, she put on an act and cried, were the tears real though, no they weren't she was so happy she had to rub salt into her eye's. That afternoon Jennifer walked over to Brad's house, she knocked on his door and fell in his arms crying once again, Brad and Jennifer grew closer and closer over the afternoon finally she had got what she wanted. But when she wants something else, will she kill Brad if he gets in her way? Is he safe with a Murderer? Who knows??? ...read more.