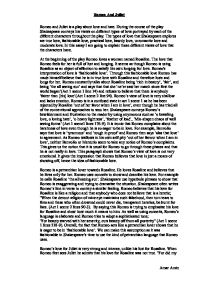 Views of love in Shakespeare's Romeo and Juliet

Romeo and Juliet is a play about love and hate. During the course of the play Shakespeare conveys his views on different types of love portrayed by each of the different characters throughout the play. The types of love that Shakespeare explores are true love, fashionable love, practical love, bawdy love, unromantic love and moderate love. In this essay I am going to explain these different views of love that the characters have. At the beginning of the play Romeo loves a woman named Rosaline. The love that Romeo feels for her is full of l**t and longing. It seems as though Romeo is using Rosaline as an object of affection to satisfy his own longing for love. Romeo's interpretation of love is 'fashionable love'. Through this fashionable love Romeo has made himself believe that he is in true love with Rosaline and therefore lusts and longs for her. Romeo constantly talks about Rosaline being 'rich in beauty', 'fair', and being 'the all seeing sun' and says that that she 'ne'er saw her match since first the world began'(Act 1 scene 1 line 14) and refuses to believe that there is anybody 'fairer than [his] love'(Act 1 scene 2 line 94). Romeo's view of love is very shallow and lacks emotion. Romeo is in a confused state in act 1 scene 1 as he has been rejected by Rosaline 'out of her favor when I am in love', even though he has tried all of the conventional approaches to woo her. Shakespeare conveys Romeo's bewilderment and frustration to the reader by using oxymorons such as 'o brawling love, o loving hate', 'o heavy lightness', 'feather of lead', 'Mis-shapen chaos of well seeing forms' (Act 1 scene1 lines 176-9). ...read more.

In the balcony scene, Act 2 Scene 2, Juliet cannot stop worrying about the guards finding Romeo even though he constantly tells her that he will be safe. 'I would not for the world they saw thee here' (Act 2 Scene 2 line 74). Another example of Juliet's practicality is that Juliet is the one that brings up the idea of marriage. 'thy purpose marriage, send me word tomorrow'(Act 2 Scene 2 Line 143). The language that Juliet uses contrasts strongly with the language of Romeo. Juliet's language is very basic, concise and almost crude in comparison with Romeo's which is full of description and poetic inference. For example when Romeo and Juliet are exchanging vows of love Juliet simply says 'my bounty is as boundless as the sea' whereas Romeo says that his love is 'too flattering-sweet to be substantial'. Juliet is not at all interested in fashionable love and tells Romeo that she does not like his 'fashionable' style of speaking ' conceit, more rich in matter than in words brags of his substance, not of ornament'. From these examples we can see that Juliet is very practical and always thinks of the future and reactions of her choices. The depth of Juliet's love is shown by the fact that though she does not have a deceptive character and she is well brought up she willingly deceives her parents about her marriage to Romeo and seems not to be perturbed about the feud between her and Romeo's families. The faithfulness of Juliet is shown when Capulet attempts to persuade her to marry Paris and the Nurse agrees with him, she shuns her Nurse and calls her a 'most wicked fiend' for the 'dispraise' (Act 3 Scene 5 line 234) ...read more.

The Friar tries to tell Romeo to love 'moderately' (Act 2 Scene 6 line 11) to ensure that his love lasts for longer. This gives the impression that he believes that he sees love as something which is not eternal and therefore can be used up. The Friar has been led to believe that young men fall in physical love rather than emotional love. 'Young men's love then lies,/ Not truly in their hearts, but in their eyes' (Act 2 Scene 3 Lines 67-8). This shows that the Friar has a view of love built up by his view of love from other people as he has sworn his life to the church. The Friar tells Romeo not to rush into love and marriage. An example of this is when he says 'wisely and slow, they stumble that run fast'(Act 2 Scene 3 line 94), when he is talking to Romeo. The Friar strikes a balance with Romeo's impetuous nature. In conclusion we can see that the characters each have their own view of love based on their own personal circumstances. And Shakespeare attempts to show his views through all of them. The point that Shakespeare tries to make is that love cannot survive in a place full of hatred no matter what type of love it is. Shakespeare is probably commenting on the types of love that were circulating in his own time and those that he had experienced. It shows us that Shakespeare is skeptical of love but he believes that he it is eternal. As well as this Shakespeare may be trying to send out the message that if love is rushed then it will not work. Romeo And Juliet Amar Amin ...read more.