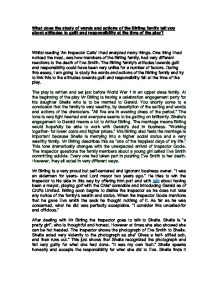 What does the study of words and actions of the Birling family tell you about attitudes to guilt and responsibility at the time of the play?

What does the study of words and actions of the Birling family tell you about attitudes to guilt and responsibility at the time of the play? Whilst reading 'An Inspector Calls' I had analyzed many things. One thing I had noticed the most, was how members of the Birling family, had very different reactions to the death of Eva Smith. The Birling family's attitudes towards guilt and responsibility could have been very unlike for a number of factors. During this essay, I am going to study the words and actions of the Birling family and try to link this to the attitudes towards guilt and responsibility felt at the time of the play. The play is written and set just before World War 1 in an upper class family. At the beginning of the play Mr Birling is having a celebration engagement party for his daughter Sheila who is to be married to Gerald. You shortly come to a conclusion that the family is very wealthy, by description of the setting and words and actions of the characters. "All five are in evening dress of the period." ...read more.

This just shows that Sheila recognized the photograph and felt very guilty for what she had done. "It was my own fault." Sheila speaks honestly and accepts the responsibility for what she did to Eva. Sheila finds it relatively to relate to Eva smith. This was because they were both young pretty girls who had just been led down different turns in life. "If I could help her now I would." Gerald comes across to be quite easy going. You can see why the Birling's want him to marry Sheila, as he is "the well-bred young man-about-town." However as you find out later on in the book, he is also very deceptive and secretive. "I was awfully busy at the works all that time." Gerald attempts to lie to the inspector and Sheila at first; however he immediately gives himself away by "pulling himself together" and getting himself a drink after the news. Even after giving himself away, Gerald still only tries to satisfy the Inspector and Sheila, by only giving them small pieces of information instead of the whole truth. "All right. ...read more.

He is a heavy drinker, but his parents are completely unaware of this problem. From the beginning, when the inspector first tells the family about a girl who killed herself, Eric involuntarily shouts out "My God!" From Eric's actions right from the start of the book, we start to get the impression that he has been up to something. This shows that Eric was still feeling very guilty about what he had done. When the inspector starts asking Eric questions he goes on telling a vague story confirming that he did get Eva Smith pregnant and did steal money. Eric try's to blame responsibility onto other "then you killed her." . There are no excuses for what at Eric did however at least he has admitted the truth that he was wrong, and knows that the important thing wasn't the money or a scandal, but Eva. "The money's not the important thing. It's what happened to the girl and what we did to her that matters." His parents did not act as badly, but they have not been able to learn this lesson. In conclusion, the Inspector is successfully used as a mouthpiece to convey Priestley's message about society. The inspector makes readers realize we should try our best to help people like ...read more.