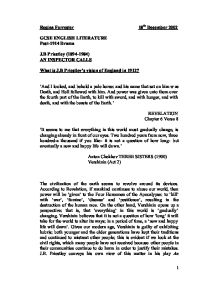 What is J.B Priestley's vision of England in 1912?

Regina Forrester 18th December 2002 GCSE ENGLISH LITERATURE Post-1914 Drama J.B Priestley (1894-1984) AN INSPECTOR CALLS What is J.B Priestley's vision of England in 1912? 'And I looked, and behold a pale horse: and his name that sat on him was Death, and Hell followed with him. And power was given unto them over the fourth part of the Earth, to kill with sword, and with hunger, and with death, and with the beasts of the Earth.' REVELATION Chapter 6 Verse 8 'It seems to me that everything in this world must gradually change, is changing already in front of our eyes. Two hundred years from now, three hundred-a thousand if you like- it is not a question of how long- but eventually a new and happy life will dawn.' Anton Chekhov THREE SISTERS (1900) Vershinin (Act 2) The civilization of the earth seems to revolve around its devices. According to Revelation, if mankind continues to abuse our world, then power will be 'given' to the Four Horsemen of the Apocalypse: to 'kill' with 'war', 'famine', 'disease' and 'pestilence', resulting in the destruction of the human race. On the other hand, Vershinin opens up a perspective: that is, that 'everything' in this world is 'gradually' changing. Vershinin believes that it is not a question of how 'long' it will take for the world to alter its ways; in a period of time, a 'new and happy life will dawn'. Given our modern age, Vershinin is guilty of exhibiting hubris; both younger and the older generations have kept their traditions and continued to mistreat other people; this is evident if we look at the civil rights, which many people have not received because other people in their communities continue to do harm in order to justify their mistakes. ...read more.

When Eva told her the truth about her visit, Mrs Birling did not compromise her story. With her power, Mrs Birling dismissed Eva's plea for help. The Inspector interrogates each member of the Birling family, hoping that he would get his message through to them: that they have all acted selfishly and used Eva for their own benefit. Mrs Birling resists this idea. When she is questioned about her conduct, she fails to show sympathy towards Eva and claims that she had 'nothing' to do with her. Her lack of understanding is shown by her remarks about Eva: 'a girl of that sort'. She continues to criticize Eva even when she has discovered that she was an 'expectant' mother: 'she had only herself to blame'. Mrs Birling persists in blaming Eva for her own death, which shows us her temperamental attitude towards people who are less fortunate than herself. She maintains that she has done nothing she is 'ashamed of', even though the Inspector had warned her that she will spend the rest of her life 'regretting' what she has done. She even confronts the Inspector: 'you have no power to change my mind'; this reaction indicates that Mrs Birling has not yet learnt the lesson of the whole situation. Mrs Birling attempts to blame the father of Eva's child: 'I blame the young man. He should be made an example of. If the girl's death is due to anybody, it's due to him'. Her harsh stance rebounds on her when she discovers that Eric, her son, was responsible of getting Eva pregnant. She suffers shock ('No-Eric-please-I didn't know'), after inadvertently accusing him of being responsible of Eva's death. ...read more.

social snobs who lack consciences. Both Eric and Sheila are made aware that their actions placed a burden upon Eva's life. They are guilty of helping Eva's aspiration to end her life grow and are ashamed of their parents for trying to excuse themselves from their misconducts. Eric and Sheila represent the younger generation who are 'quick to learn'. Priestley hopes to show us that some individuals take advantage of their power to abuse other people to their own liking; People who think they are respectful citizens often behave immorally and almost criminally. Eva was a girl trying to survive her harsh life, but instead found herself being used by people above her social status, until she was no longer of use. Priestley's vision of England in 1912 is a very harsh one. Looking back at the Titanic, most of the people who had the worst treatment and died in its sinking were the people who belonged to the lower classes. They had the lowest chance of surviving compared to the richer ones. People's greed for power and wealth often results in them thinking and acting selfishly. The Inspector summarizes the play's message: that is, 'We are members of one body. We are responsible for each other'. We are not alone in this world. Priestley hopes to show us that the younger generations are the ones who can change the world we live in. Along with Vershinin, Mr and Mrs. Birling is guilty of exhibiting hubris: that is, that if they remain undisturbed about Eva's death, they would be fine. Like the Revelation, we have to be aware of what we are contributing to this world before it's too late. 1 ...read more.