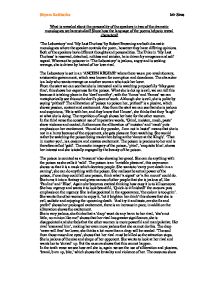 What is revealed about the personality of the speakers in two of the dramatic monologues we have studied? Show how the language of the poems helps to reveal characters?

What is revealed about the personality of the speakers in two of the dramatic monologues we have studied? Show how the language of the poems helps to reveal characters? 'The Laboratory' and 'My Last Duchess' by Robert Browning are both dramatic monologues where the speaker controls the poem, however they have differing opinions. Both of the speakers have different thoughts and personalities. The Duke in 'My Last Duchess' is reserved, detached, ruthless and sinister, he is driven by arrogance and self regard. Whereas the poisoner in 'The Laboratory' is jealous, angry and is seeking revenge, she is driven by hatred of her love rival. The Laboratory is set in an 'ANCIEN R�GIME' where there was a pre-revolutionary, aristocratic government, which was known for corruption and decadence. The character is a lady who wants revenge on another woman who took her lover. From the start we can see that she is interested and is watching purposefully 'May gaze thro', this shows her eagerness for the poison. What she is doing is evil, we can tell this because it is taking place in the 'devil's smithy', with the 'fumes' and 'flames' we can metaphorically see this as the devil's place of work. Although she is evil, she is polite by saying 'prithee?' The alliteration of 'poison to poison her, prithee?' is a plosive, which shows passion, content and excitement. ...read more.

It also creates excitement, which is put on emphasis by the caesura. The alliteration of 'the delicate droplet' and 'fortune's fee' shows her future happiness and she is giving her entire fortune for the droplet. She takes pleasure that it will bring pain to her rival, 'If it hurts her, beside, can it ever hurt me'. She then puts her pleasure aside and has a sense of urgency 'Now, I take all my jewels, gorge gold to you fill', showing that the chemist is greedy, and this counts as his payment. But she is quick to go back to her enjoyment and excitement 'You may kiss me' also showing her happiness. She is still paranoid that the poison might kill her ' But brush the dust off me, lest my horror it brings.' She is squeamish that the dust might accidently kill her or other people and it also carries the horror of the poison. Furthermore it shows her greed and selfishness. Finally we get told when it is going to happen, 'Ere I know it-next moment I dance at the King's!' She will be able to disappoint and it will happen during the King's dance. During the entire poem we see the extent of her ruthlessness and her power. This is fuelled by her selfishness, greed, excitement and pleasure. The intensity builds up because the enthusiasm and sensual excitement builds up throughout the poem. ...read more.

There is a constant use of caesuras, 'Never to stoop. Oh sir, she smiled, no doubt.' Showing self-righteousness, arrogance and his autocratic position and also giving the grim climax. It will make no difference to her smile of she was killed because he was treated in the same way as everything else. 'I gave commands, then all smiles stopped together', showing that he had her killed, showing his sinister and autocratic side. Then the Duke starts talking the messenger as if he is a Count, this is sinister because the Duke says nothing more of his Duchess. 'Of mine for dowry...though his fair daughter's self', shows that the Count is going to pay for his daughter to get married to the Duke, he is after the daughter but money is more appealing because it is mentioned first. He is compared to 'Neptune', showing his control and gives him a feeling that he is a God and he is 'taming' his wife, the 'sea-horse'. The Duke is more sinister than the poisoner; she is engaged and enthusiastic of what the poison is going to do. The Duke is driven by his arrogance and self regard. He wants the respect that he requires and there is a threat in what he is saying while she is excited by the power because she has the capacity to do a lot of damage, she is ruthless and wants wealth and power. But both of them are paranoid and unhinged, ?? ?? ?? ?? Shyam Raithatha Mr Sims ...read more.