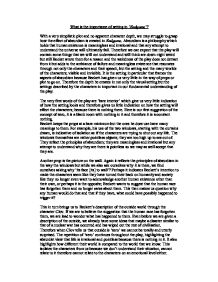 What is the importance of setting in 'Endgame?'

What is the importance of setting in 'Endgame'? With a very simplistic plot and no apparent character depth, we may struggle to grasp how the effect of absurdism is created in Endgame. Absurdism is a philosophy which holds that human existence is meaningless and irrational and that any attempt to understand the universe will ultimately fail. Therefore we can expect that the play will contain some things that we will not understand and will think are down-right weird but still Becket wrote them for a reason and the weirdness of the play does not detract from it but adds to the ambiance of failure and meaningless existence that resonates through not only the characters and their speech, but the setting and the many worlds of the characters; visible and invisible. It is the setting in particular that frames the aspects of absurdism because Beckett has given us very little in the way of props or plot to go on. Therefore the depth he creates in not only the visual setting but the settings described by the characters in important in our fundamental understanding of the play. ...read more.

It almost seems like Hamm feels that the outside world is also part of his 'kingdom' and therefore should know everything about this. We sense this when at the start of the book Hamm says 'It'd need to rain' as if it will rain just because he says it should. Clov is a huge part of Hamms' worlds because he is the one that moves Hamm, sees for Hamm and generally does Hamm's bidding. Their lives are inexplicably interrelated so the world of one, generally involves the other. Hamm's inside world, the room and his memories, involves Clov both physically and mentally. Because Hamm is such a complicated, unpredictable character, it makes it hard for Clov to follow and please him. Hamm sometimes lives in his memories, for instance when he is telling his story, '[Pause. Narrative tone.] The man came crawling towards me, on his belly...' He seems absorbed by his story as we can tell by the fact that he continues to speak, without interruption, for the next two pages. We can understand why Clov would get irritated by Hamm. Hamm is too self-involved to see that Clov is unhappy. ...read more.

In fact she often ignores him, as the quotes in the previous paragraph suggest. Even though his wife in obviously unhappy, Nagg is not brought down because he appear to be content with the way his worlds are. The inside world's of Nagg and Nell mean a lot more to them than the room and any material setting that surrounds them. This is suggested by the fact that they talk of little else other than their memories of the memories of someone else. In conclusion, I think that Beckett's main aim in this play was to use the setting to help us to get to know the characters on a deeper level and to understand some of their mannerisms and actions throughout the play. Due to the lack of plot and character depth shown through speech, Beckett must use the setting and the characters worlds to show the audience or reader an alternative side to the characters that we may not have seen otherwise. This in turn adds depth to the play itself because it is solely the characters and their speech that make the play what it is and if we can understand more about the characters then we can understand more about the play and why Beckett wrote it. ?? ?? ?? ?? ...read more.